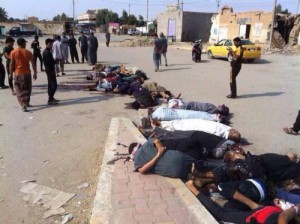 Forces of the so-called Islamic State have reportedly carried out yet another massacre against the tribe in Iraq called Albu Nimr, “Family of the Tiger.”

The BBC, quoting Sheikh Naeem al-Gaoud, an elder of the Albu Nimr, reported last week that ISIS militants rounded up and shot dead 70 members of the Sunni Arab tribe in the Anbar province village of Khanizir on the night of October 4. Members of the tribe had fled there after ISIS sacked the Anbar provincial capital, Ramadi, in May.

Gaoud, speaking to The Daily Beast by phone, confirmed the deaths, and said the Albu Nimr had been singled out by ISIS because of their commitment to fighting the group. He said the victims were all civilians, but they had relatives actively combating the soldiers of the self-declared caliphate.

Despite the Sunni tribe’s complaints that it lacks military support from the Shia-led government of Iraqi Prime Minister Haider al-Abadi, the Albu Nimr have in the past been one of the few Anbar tribes to resist stubbornly the onslaught of the jihadists, an act of defiance that has cost the tribe dearly.

In the fall of 2014, ISIS massacred Albu Nimr fighters, killing upwards of 500 of the tribe’s members. The bodies of 200 Albu Nimr were found in a ditch-turned-mass-grave near the town of Hit after the tribe’s leaders were summarily executed inside the city.

The Albu Nimr are part of the larger Dulaim tribe. The Dulaimis were at times uneasy partners with the regime of Saddam Hussein, fielding many of his soldiers. However, in 1995 they also launched protests against his rule when a Dulaimi general and other officers were executed for criticizing Hussein’s erratic eldest son Uday.

After the 2003 U.S.-led invasion of Iraq toppled the Hussein regime—opening the way for the rise of AQI—the Albu Nimr and Dulaim eventually became U.S. allies in what was called the “Sahwa,” or Anbar Awakening, in which Sunni and largely former pro-regime elements in Anbar united with U.S. forces to combat AQI. Even before this alliance, the Albu Nimr had sought out a pact with the U.S. as early as 2004 (PDF), seeing AQI as a threat to Anbar’s established tribal order.

“The tribes the first time around, whether the Nimr in 2004 or the others in late 2006, were engaging in self-interested behavior,” Stephen Biddle, a professor at George Washington University’s Elliott School of International Affairs who has studied the Anbar Awakening, told The Daily Beast via Skype.

Anbar, Iraq’s largest province by area, is today an overwhelmingly Sunni ISIS stronghold that shares borders with Syria, Jordan and Saudi Arabia. Its long, porous frontiers—which ISIS has sought to erase altogether—easily facilitated the flow of foreign fighters and weapons into Iraq during the U.S. occupation. In the Awakening, the tribes allied with the U.S. were often resentful of the new Shia-led government in Baghdad, but in AQI also saw an immediate threat to their communities.

“The general problem confronting all the tribes in Anbar really, in this period,” says Biddle, “is al-Qaeda’s local affiliate was viewed as a social upstart, as a usurper of traditional tribal powers, and as an entity that was going to take over traditional smuggling routes that the tribes had used for patronage networks that make up the heart and soul of tribal politics. … This wasn’t a charitable act of nobility on behalf of some larger philosophy of government.”

Biddle says that although many tribes in Anbar today likely have at least some enmity towards ISIS, lacking direct U.S. support such as they had in 2006, few are going to risk crossing the jihadists lest they end up like the Albu Nimr.

Gaoud for his part says Albu Nimr’s current fight against ISIS is a holy duty, not part of a land or power dispute.

“ISIS as you know is an enemy of Islam,” he tells The Daily Beast. “Any good man will kill them.”

Gaoud also insists other tribes resent ISIS as much as the Albu Nimr does, and some will take part in a larger anti-ISIS fight. “Many tribes will fight ISIS and kill ISIS… ISIS is inhuman,” he says.

But outside of the Albu Nimr, Anbar tribes openly opposed to the jihadists appear to be few.

Leading up to and after the 2011 U.S. departure from Iraq, Anbar tribes who previously opposed AQI increasingly entered into conflict with the government of former Iraqi Prime Minister Nouri al-Maliki. His heavy-handed and sectarian policies drove many in Anbar—part of Iraq’s Sunni Arab heartland—away from cooperation with Baghdad, and some may have come to view ISIS as coming to their rescue.

“The phrase ‘liberators’ implies an enthusiastic embrace,” says Biddle, “but there has clearly been a prudential embrace. How enthusiastic people are about this I’m sure varies from tribe to tribe and probably individual to individual within the tribe, but it’s very clear that as a group Anbar Sunnis are disaffected with the Iraqi government, and if they believed ISIL was a bigger threat than the government, you’d probably be seeing a lot more resistance to ISIL than you do.”

“I think the great majority of them right now view ISIL as the lesser of two evils,” he continues, using ISIL, an alternative acronym for ISIS. “I don’t think they’re enthusiastic about it.”

Following Maliki’s departure in September 2014, his successor Abadi has sought to make an Anbar offensive the cornerstone of an overall strategy to retake areas of the country held by ISIS, but attempts to breach ISIS’s stranglehold on the province have so far proved futile.

Biddle says U.S. policy has sought to replicate the success of the Anbar Awakening in eradicating ISIS, but the sectarian situation in Iraq today has deteriorated so badly since 2007 that mirroring past winning strategies has become increasingly improbable.

The presence in the theater of the Hashd al-Shaabi (Popular Mobilization) Shia militias has exacerbated sectarian rifts built by Saddam and deepened by Maliki. The Hashd al-Shaabi are irregular Iran-backed forces augmenting the Iraqi army. They were mobilized by a fatwa issued by Iraqi high Shia cleric Grand Ayatollah Ali al-Sistani in June 2014 calling for resistance against ISIS.

But the Hashd al-Shaabi have come under fire in their own right for alleged abuses committed against Sunni civilians. This has further alienated the potential Sunni Anbar allies needed for an Iraqi victory in the province, and multiple government efforts have stalled.

Other Anbar tribes may not have fully embraced ISIS, but they won’t risk their lives to oppose them like the Albu Nimr, especially when they trust Baghdad even less.

“If you were going to recreate an Anbar Awakening—as U.S. policy has fondly hoped to do for many, many months now—you would somehow one way or another have to recreate an Iraqi government security force that the tribes would trust and that would actually be capable of protecting them, and there’s a long way to go between now and any kind of security force that looks like that,” Biddle continues. “The larger narrative of what’s going on here is various tribes in Anbar, not limited to the Nimr, don’t like ISIL, and would break with them if they thought they could survive the exercise.”

He goes on: “But surviving the exercise is going to take military support from someone big and strong enough to fight ISIL, and that has to be the Iraqi government or the United States, and neither one of those parties is either willing or able to do that.”

Despite a lack of help on the horizon and having no love for Baghdad, the Albu Nimr have stood fast against the jihadists today, just as they did when they had U.S. support a decade ago. As Sunday’s events have shown, Anbar’s “tigers” have paid a bloody toll for their stubborn and courageous resistance.