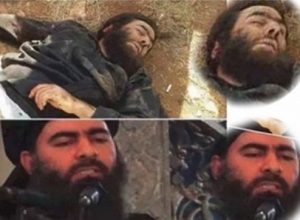 A senior official in the intelligence department of the Iraqi Interior Ministry asserted that the infamous leader of the Islamic State (IS), Abu Bakr al-Baghdadi, was still in the desert border area between Iraq and Syria and that his health was deteriorating, like reported by kurdistan24.net.

According to the director general of the intelligence and counter-terrorism office at the Ministry of Interior, Abu Ali al-Basri, Baghdadi was still in Syrian territory the jihadist group holds at the border with Iraq, denying reports that he had fled to another country.

The Iraqi official also claimed the IS leader had suffered from “fractures and serious wounds” which might be the result of previous airstrikes on the organization’s strongholds in Iraq.

Baghdadi, whose real name is Ibrahim Awwad Ibrahim al-Badri, rose to fame in 2014 as he established the Islamic “Caliphate” in northern Iraq in a heavily publicized speech delivered in the city of Mosul. Since then, he has scarcely appeared publicly, relying on recorded voice messages to communicate with his followers.

“We have information and documents from sources within the terrorist organization,” Basri told Iraqi news outlet, al-Sabah. “Baghdadi is still alive and hiding in the Syrian region [west of Deir al-Zor] with the help of his collaborators.”

He added that the jihadist had recently been admitted to a hospital in the Jazeera desert for his “deteriorating psychological state” and for fractures and wounds in his legs that prevent him for walking unassisted.  Basri described Baghdadi’s condition as “severe.”

Iraqi Prime Minister Haider al-Abadi declared final victory over IS late last year but stressed Iraqis to stay vigilant as sleeper cells and insurgencies remain a threat. Around the same time, reports suggested the US-led coalition was in possession of the IS leader, but the coalition promptly refuted the claims.

Iraqi authorities recently issued arrest warrants for Baghdadi and other senior jihadis, as well as remnants of the former regime’s Ba’ath Party, including Saddam Hussein’s daughter.