You are here: Home / Senza categoria / Abu Bakr al-Baghdadi, here’s what we do know about the Isis leader 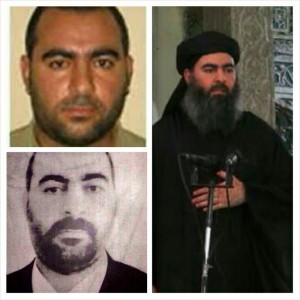 The fate of the Isis leader, Abu Bakr al-Baghdadi, remains unclear after the Iraqi air force struck a meeting of the militant group’s senior command.

Hospital officials said eight Isis commanders were killed but al-Baghdadi’s body was not among them, while the Iraqi military said it believed he was “carried away by a vehicle” after his convoy was hit.

The circumstances surrounding the attempted strike on the Isis leader are, like much of the detail surrounding his own life, steeped in uncertainty. Here is what we do know about one of the most wanted men in the world.

Aside from footage of the Isis leader giving a speech in Mosul, Iraq, upon the declaration of Isis’s so-called “caliphate” last year, there are only two confirmed photos of al-Baghdadi in existence.

One is a grainy image held by the Iraqi government showing al-Baghdadi as a young man wearing a suit. The other, recovered this year from American military archives, shows al-Baghdadi in 2004 after his arrest following the US invasion.

Other, poor-quality images claiming to show the Isis leader have been posted more recently to social media. But none have been verified, and the lack of pictorial evidence of the man has contributed to an aura of mystery surrounding him.

How old he is

US records on al-Baghdadi exist from the time when he was held at Camp Bucca, the main American-run prison in Iraq after Abu Ghraib was embroiled in a torture scandal.

Al-Baghdadi is believed to hold an undergraduate degree, masters and PhD from the Islamic University in Baghdad.

He quickly rose up through the ranks of al-Qaeda after he became radicalised during the Iraq War, and emerged as leader of the splinter group that later became Isis.

There’s a bounty on his head

The Isis leader is listed as a terrorist by the FBI and since 2011 there has been a $10 million reward posted for information which could lead to his capture.

He is not the US’s most-wanted man, however. The bounty on his head remains lower than that of Ayman al-Zawahiri, the al-Qaeda leader who cast him aside when that group denounced Isis.

He was a polite, football-loving student

When he was younger, al-Baghdadi was a keen footballer with his local mosque’s team, according to The Telegraph.

Former friends described him as their best player, one calling him the “Messi of the team”. He married around the year 2000 after completing his PHD, and lived the quiet life of a family man until the 2003 invasion.