You are here: Home / MidEastGulf / About 60 Tajik nationals killed fighting in Syria and Iraq 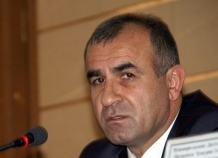 To-date, about 60 Tajik nationals have been killed fighting alongside Islamic State of Iraq and the Levant (ISIL) militants in Syria and Iraq, Tajik Prosecutor-General Yusuf Rahmon announced yesterday during a meeting with representatives of the public of Isfara, Kobnibodom and Asht in the northern province of Sughd.

“Tajik chief prosecutor noted that about 300 Tajik nationals, aged 18 to 35, are fighting alongside ISIL militants in Syria and Iraq” Iqbol Teshayev, a spokesman for the Isfara mayor’s office, told Asia-Plus in an interview.

40 residents of the city of Isfara alone have reportedly traveled with their families to Syria and Iraq to join ISIL militants.

Tajik chief prosecutor called on the meeting participants to pay a special attention to education of children and not to yield to calls of terrorist organizations, stressing that such organizations now have more than 7,000 social media accounts.