You are here: Home / MidEastGulf / About 500 Kyrgyz citizens join terrorist groups in Syria 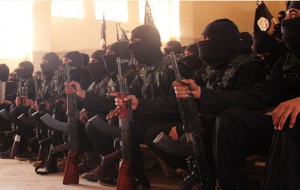 About 500 citizens of Kyrgyzstan, including 122 women, are currently in Syria in the ranks of international terrorist groups, Kyrgyzstan’s Prosecutor-General Indira Joldubayeva said Wednesday. She was speaking at the 7th regional conference of the International Association of Prosecutors of Central and Eastern European and Central Asian countries dedicated to combating terrorism and violent extremism that opened on Tuesday in the Black Sea resort of Sochi.

“According to special services, about 500 Kyrgyz citizens are in Syria in the ranks of international terrorist organizations, among them 122 women,” – she said.

Furthermore, the activities of 8 transnational terrorist groups and more than 60 religious and extremist groups have been terminated during the preparation and perpetration of terrorist attacks.

In addition to that, three channels of smuggling recruits to the Turkish-Syrian area have been uncovered and terminated in Kyrgyzstan. “Currently, about 2,000 members of various religious, extremist and terrorist groups are registered across the country. For a country like Kyrgyzstan, which has a population of no more than 5 million people, these are impressive figures,” Joldubayeva said.