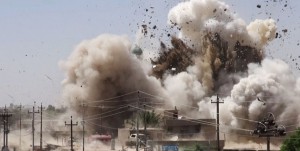 A prominent Islamic State leader was killed in airstrikes launched by the US-led international coalition west of the northern Iraqi city of Mosul.

Nicknamed “Mohamed Baqia”, Al-Huran was one of the important leaders of the terrorist organisation, Al-Jabouri said, noting that he belonged to the Alloizian tribe, one of the largest Arab tribes in the city, and was a native of the nearby village of Batisha.

International coalition forces have carried on with air raids over Mosul, targeting IS movements both inside and outside the city.