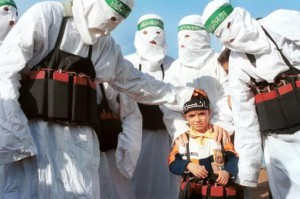 “We have reached an agreement under which, within 48 hours, we will call on Mahmoud Abbas to launch consultations on the creation of a [national unity] government,” Azzam al-Ahmad, a senior official of the ruling Fatah party, told a press conference.

He added that the Moscow talks had the aim of restoring “the unity of the Palestinian people.”

Meanwhile, Hamas’ deputy chairman, Moussa Abu Marzouk, said a unity government “is the most effective tool to promote the contentious issues that formed during the years of division, and it is responsible to promote the solutions, including the holding of free and democratic elections in the West Bank and Gaza Strip.”

Iran-backed terror group Palestinian Islamic Jihad was also in Russia for the talks. Both PIJ and Hamas have sworn to destroy Israel.

According to The Tower magazine, “A Fatah-Hamas unity government would violate one of the principles for Middle East peace set out by the Mideast Quartet (the United States, Russia, European Union, and United Nations). In 2006, the Quartet stated that ‘all members of a future Palestinian Government must be committed to non-violence, recognition of Israel, and acceptance of previous agreements and obligations.’ ”

There have been multiple attempts in recent years to form a Palestinian unity government, the most recent being in 2014.

The factions will form a new Palestinian National Council that will in turn select the PLO Executive Committee. Within two months the new members will attempt to form a government.

Hamas has so far refused to renounce terror or change its charter calling for Israel’s destruction.

Ahmad, the Fatah spokesman, also claimed that “today the conditions for [a unity initiative] are better than ever.”

However, both factions have been fraught with bitter infighting. In the past week, power outages in the Gaza Strip led to protests against Hamas. Hamas made several arrests, including imprisoning a Fatah spokesman. Fatah party members burned photos of Hamas and vice versa. Abbas himself charged Hamas with stealing Gaza’s electricity.

Nevertheless, both groups showed some signs of unity when they celebrated the Jerusalem terror attack that left four Israeli soldiers dead.