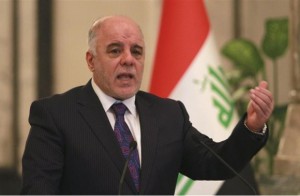 The Prime Minister Haider al-Abadi announced on Monday, that 40 suicide bombers are entering Iraq each month from states untouched by wars 100 years ago, indicating that the number of foreign fighters in ISIS has become more than the number of Iraqi fighters.

Abadi said in a speech during the International Conference to limit ISIS recruitment for children attended by IraqiNews.com, “There are many countries untouched by wars in the past 100 years; suicide bombers come from these countries,” pointing out that “40 bombers are entering Iraq each month.”

“The number of foreign fighters in Iraq has become more than the number of Iraqi fighters,” noting that “regional conflict and international conflicts large are part of imminent danger to the region,” Abadi added.

It is noteworthy that that al-Abadi (in June 8, 2015) confirmed that the world today is in need to corporate efforts to stop the flow of foreign “terrorists” who are causing death and destruction in Iraq and the region.