You are here: Home / FakeNews / A war by any other name 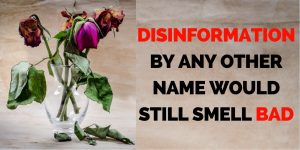 When Shakespeare wrote the famous words “a rose by any other name would smell as sweet”, he pointed to the fact that what matters is what something is, not what it is called, like reported by euvsdisinfo.eu.

This week in pro-Kremlin disinformation, we noticed ample usage of the term “war”. First off, the ban on Russian athletes in the upcoming Olympics was yet again described as a war on Russia. In fact, it was the systematic state sponsored doping program in Russia that made the IOC decide to suspend certain Russian athletes. Russian athletes not convicted of doping will be allowed to compete under the Olympic flag. Hardly a war, then.

Furthermore, in a Hungarian outlet, it was stated that immigrants are fighting a war against authorities in Sweden, and that the Swedish Prime Minister wants to use the military against immigrants in the country in order to restore order. The Swedish Prime Minister did indeed suggest the use of the military, but not in the context of immigrants, but to end violence between criminal gangs.

What about Ukraine? There is a war going on there, isn’t there? Most definitely, but what kind of war is it? Is it a civil war, i.e fought without foreign involvement? Is it a war that has no links to Russia? Is it Ukraine that started a war against Russia?

All were suggested by pro-Kremlin disinformation this week. Well, the Office of the Prosecutor of the International Criminal Court has concluded that the situation within the territory of Crimea and Sevastopol amounts to an international armed conflict between Ukraine and the Russian Federation. This international armed conflict began at the latest on 26 February when the Russian Federation deployed members of its armed forces to gain control over parts of the Ukrainian territory without the consent of the Ukrainian Government. It is safe to say that this is a war being fought on the territory of Ukraine, not in Russia.