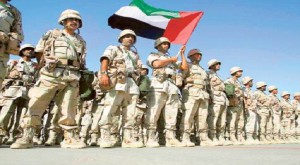 The al-Anad base, which sits about 30 miles north of the strategically important port city of Aden in southern Yemen, is the largest in Yemen and considered a critical access point to the southern and western provinces.

Pro-Hadi government forces, backed by a small number of Saudi and Emirati special forces, seized Aden in late July, meaning the capture of the al-Asad base is the second major defeat for the Houthis in less than a month.

According to the unnamed senior Yemeni and American military officials who spoke to the Times, the Emirati military brigade arrived in Aden in recent days, along with tanks and other armored vehicles, marking the first time a large foreign force had entered Yemen’s ground war.

“The U.A.E. and the Saudis are putting a lot into this,” a senior U.S. military official told the Times on condition of anonymity, adding that the aggressive military move by both countries spoke volumes about their concerns over Iran’s growing influence in the region.

It is unclear whether or not the Emirati troop participated in the fight to retake the al-Anad base from the Houthis.

NYT reports that the foreign troops made an impact almost upon arrival, by playing a role on Monday in routing out the Houthis from the al-Anad airbase.

However, local journalists told BBC that the Emirati forces “had recently disembarked in Aden and were deployed as advisers, rather than in combat, while a Yemeni military official denied foreign troops had landed in Yemen.”

The Associated Press (AP) reports that foreign troops, namely those from the UAE, are assisting the pro-government forces with operating sophisticated weapons, including tanks.

Since late March, a Saudi-led coalition of Sunni Arab states, including the UAE, has been launching airstrikes against the Houthis and their allies, military units loyal to Yemen’s former President Ali Abdullah Saleh.

The stated goal of the Saudi-led campaign is to restore President Hadi to power and defeat the Houthis, who American and Saudi officials have accused of being backed by Iran, Saudi Arabia’s regional enemy.

“Apparently frustrated with an impasse in the combat — as well as growing international condemnation of airstrikes that have killed hundreds of civilians — the Saudi-led coalition recently increased its assistance to fighters battling the Houthis in Aden,” reports the Times. “Fighters recaptured the city from the Houthis last month. Some of the Yemeni fighters were trained in the Persian Gulf, and the United Arab Emirates supplied them with armored vehicles.”

“The Houthis acknowledge their alliance with Iran but deny that they are acting as its proxy. The Obama administration has said that the Saudis are exaggerating the ties between Tehran and the Houthi rebels, who control Sanaa, the capital, and other parts of Yemen,” it continues. “The criticism has not deterred the Saudis from carrying out thousands of airstrikes and imposing an air and maritime blockade around Yemen as part of an aggressive offensive that aid workers say has helped fuel a humanitarian crisis.”

After a nuclear deal was reached between Iran and five world powers led by the United States, U.S. Secretary of Defense Ashton Carter questioned whether the “Iranian influence with the Houthis is real.”

U.S. Secretary of State John Kerry, prior to the nuclear deal’s announcement last month, said the U.S. was aware that Iran was providing assistance to the Houthis rebels.

The Shiite Houthis and their allies still control large swathes of Yemen, particularly in the northern part of the country.

However, they have lost territory in the last few weeks as the Saudi-led coalition has increased its military commitments to the fight.

“In the south, the Houthis are struggling against a force that includes southern separatists, the fighters who trained in the Persian Gulf and now the troops from the United Arab Emirates,” notes the Times.