You are here: Home / Mediterranean / A troubling new wall rises at the Tunisia-Libya border 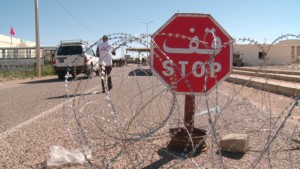 Mounds of ocher-colored soil dot the horizon. The embankment, still loose, shows that the trench is fresh. We can’t get too close as the place has been declared a “closed military area.”

In Ras Ajdir, the last Tunisian position before the Libyan coastline, there has been an unusual amount of activity involving excavators over the past few weeks. Tunisia has decided to dig a trench filled with saltwater and topped with a sand dune to protect itself from perils on the Libyan side of the border. Designed to spread across 168 kilometers — of the 520 kilometers of shared border — the wall signals a break in the history of this porous Tunisian-Libyan zone, which has long been open to all kinds of traffic.

Tunis decided to build the wall after the June 28 terror attack on the El Kantaoui beach resort, near Sousse, in which 38 foreign tourists were killed. The attacker, a young Tunisian, had been trained in a Libyan camp, according to Tunisian authorities. That was also the case for the two attackers who killed 21 foreign visitors at the Bardo Museum in Tunis on March 18.

Faced with this unprecedented terrorist offensive targeting one of the pillars of its economy — tourism — Tunis says it must plug it porous border with Libya, which it sees as the central source of the problem.

The project is very delicate. Libyan authorities have taken offense, denouncing the “unilateral decision.” And discontent is simmering among those on both sides of the border living on smuggled goods. As a sign of its embarrassment, the Tunisian government has avoided using the term “wall,” instead preferring the euphemism “obstacle.” Whatever you call it, the new face of the Tunisia-Libya border is highly controversial.

About 100 kilometers away from Ras Ajdir, the Tunisian town of Medenine — the capital of the eponymous governorate that runs along the northern part of the border — has been buzzing with contention. On one particular day, a Libyan delegation was passing through the city for a previously scheduled meeting to explore integrating communities on both sides of the border more deeply. Evidence of the wall could not have come at a more inopportune time.

“Why erect this wall when one was brought down between the two Germanies?” asks Salim Grira Mzioui, a local council representative of Wazen, a Libyan village along the border. “This will pose insurmountable problems. There are farmers cultivating land on both sides. There are also camel herds coming and going.”

Mzioui says the wall will put an end to ancestral traditions of border communities that have long ignored the state line artificially dividing entire tribes. “We’re going to divide a people,” adds Adel Arjoun, a Tunisian hotel owner from Medenine.

In Medenine or in Ben Gardane, the closest town to the border, it’s easy enough to find supporters of the wall. “The Tunisian government has the right to protect its borders for national security reasons, but it has to make people understand that the wall isn’t directed against them,” says Said Lamloun, a lawyer and representative of the Tunisian Human Rights League in Ben Gardane.

This is no simple task. Neglected for decades, as economic strategy gave priority to the coast, the people of inland Tunisia survived on smuggling with Libya to the east and with Algeria to the west. Because Libyan oil bought at the border costs half of what people pay at the pump in Tunisia, trafficking can prove to be quite lucrative. The evidence is in the container stalls and makeshift gas stations placed every 100 meters on the region’s roads.

“This wall is against us, against our people, against our food, against the Tunisian south,” says Moncef Ali (not his real name). With a stern look on his face, the Medenine bazaar shopkeeper sits on a stool surrounded by textile products imported from China, India and Turkey — all smuggled through neighboring Libya. “The government in Tunis is punishing the south for terrorist affairs that have nothing to do with us,” he adds.

The complaints murmured throughout Medenine’s bazaar reveal growing hostility against the wall. For now, there has been no serious incident. But for how long? “When the wall is finished, the region will burn it,” Ali predicts.

That’s the concern. Tunis is subject to a painful alternative: a terrorist infiltration through a porous border or social instability fueled by the border’s sudden closing, which hinders livelihoods from trafficking. After long giving priority to social stability — by turning a blind eye to trafficking — the government has recently been forced to face the anti-terrorist imperative, even at the risk of weakening the border’s informal economy.

In early 2015, troubles had broken out in Ben Gardane and, further to the south, in Dehiba, because of a departure tax imposed upon Libyans leaving Tunisia, a measure that penalized border exchanges.

With the arrival of this wall, there is also the rising risk of militias reigning on the other side of the border. “There will be Libyan retaliation, you can be sure about that,” hotel manager Adel Arjoun says.

But in Medenine, some officials are trying to put things into perspective. “Yes, Libyan militias living on trafficking can look to spark unrest at the border to send a message to Tunis,” a police officer says. “But this won’t go very far, because Libyans from Tripolitania [the western region bordering Tunisia] need Tunisia more than Tunisia needs Libya.”

Maybe, but there are Tunisian regions — the eastern border zones — that need Libya more than they need Tunis. And thus a wall, for better or worse, will always be a simple answer to a complicated problem.