You are here: Home / Senza categoria / A new year for Daesh 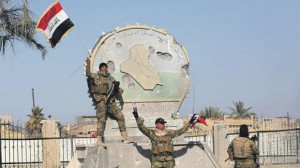 The recapture of the Iraqi city of Ramadi from Daesh (Isis) has been hailed as a significant symbolic victory, and it is. But symbolic of what? The White House is claiming it as a sign that its strategy to defeat Daesh is working. But Ramadi could yet become a symbol of the world’s inability to handle the consequences of Daesh’s defeat.

We have been here a decade ago. In 2004, the recapture of Falluja by US troops was hailed as a turning point in the Iraq war. But the city’s recapture was not accompanied by a strategy to win over the support of the local population. The triumph was short-lived.

The real test for 2016 will not be whether Daesh can be defeated. That’s the easy part. The difficulty for the anti-Daesh alliance lies in the creation of a workable peace in the wake of victory.

Daesh has been so hyped up – by its own propaganda of the deed, public fear in the West and opportunist Euro-American politicians seeking to win office by stoking fear and suspicion – that its fundamental strategic weaknesses, which doom it in the longer run, need to be reiterated.

First, it is doomed to lose even if it had the best generals and the best single army – even if its soldiers number a quarter of a million (the largest estimate) and not 50,000 (the most conservative guess). By rejecting the world state system, and laying claim to any land where Muslims are to be found, it effectively provokes a powerful international alliance against it.

The alliance includes states willing to forget their serious differences and rivalries. The paradox Daesh faces is this: the more powerful it seems, the larger the alliance against it will become. In extremis, even reluctant China, which has a Muslim population, could end up being provoked into joining the alliance.

In such circumstances, Daesh might win a hundred battles, regain Ramadi and other symbolic cities, and still lose the war.

Second, Daesh’s successes have so far been against relatively easy targets. The Iraqi army is large but made up of scandalously-underequipped soldiers who joined up for the wage; it is led by officers who bought their way into the corrupt pyramid of bribery that is the Iraqi army today.

In Syria, Daesh has faced overstretched troops, fighting on more than one front and who have held out only thanks to the air power of the Syrian regime.

Daesh itself has benefitted from the advice of trained, Baathist (Sunni but secular) Iraqi army officers who found themselves put aside under the post-Saddam Hussein regime. But Daesh has no air force and it’s doubtful how it would fare against a professional army (as long as the local population is on side).

Daesh itself has avoided clashes with professional armies when it could. It has long reached the Syrian border with Israel but, despite repeated boasts that Israel needs to beware, has made no direct attempt to engage the Israeli forces.

Third, Daesh faces internal contradictions. Ideologically, it is geared for ever greater expansion but, in the Middle East, it has run against geographical limits: Iran, Lebanon, Jordan and, obviously, Israel will all resist it. It has lost 40 per cent of its Iraqi territory (although only 14 per cent of the total territory it has held for the past two years). Other parts of Syria will be more difficult to conquer.

Meanwhile, for all its claims to be a State, and its attempts to develop a functioning economy and bureaucracy within its territories, the results are at best mixed. Daesh is fabulously rich when compared with other terrorist groups but poor when compared with other states. It does not even have, currently, the capacity to refine the oil it produces.

The biggest source of income for Daesh remains the confiscation, not the production, of wealth.

In these circumstances, no State can survive for long without collapsing under the weight of its own contradictions.

Fourth, if Daesh’s leaders seek to entrench themselves in the territory they’ve gained, swallow their expansionist rhetoric and seek accommodation with their neighbours, those leaders will risk being deposed by followers who consider the compromises to be unholy (or simply an obstacle to their own careers as warlords).

Daesh could break up, as a result, into rival fiefdoms, or else be outflanked bya rival terrorist organisation, just as Daesh itself has displaced al-Qaeda in various territories.

The recital of these four factors probably sounds glib in the face of Daesh’s growing presence in Libya and – although often ignored – Gaza, where Daesh has declared the Islamist group Hamas heretical for daring to put Palestinian nationalism before Islamic world expansion. It is true that there is nothing to be sanguine about Daesh’s migration out of Syria and Iraq.

But this migration is feeding off the collapse of governance and hope in these territories. It is not the strategic strength of Daesh itself that is pumping the expansion. It is the collapse of alternatives.

In Gaza, the youths joining Daesh have given up even on the ruthless Hamas in the struggle against Israel, whose defence of itself has included penning around 1.8 million people into an area barely larger than Malta and pounding civilian homes with bombs that have sometimes wiped out entire extended families bar one or two survivors.

In Libya, many Daesh fighters are claimed to be non-Libyans, flown in for particular missions. But the situation is becoming increasingly more precarious, not least because the country risks running out of cash very soon.

Even if oil production were to come back to normal overnight, Libya would still have to come to terms with the low price of oil – now at $36 a barrel, the lowest it has been for 11 years.

The price of oil risks creating another crisis at the other end of the Arab world – and therefore other opportunities for warlords. The current price is only a third of what it needs to be for Saudi Arabia’s income to equal its annual expenditure. It’s estimated that the country’s cash flow can only survive another five years with oil priced at $50 a barrel.

The survival and growth of Daesh (or an extremist replacement) therefore depends, as it always has, on the collapse of the realistic alternatives. Its hopes are pinned on three factors: the extraordinarily low price of oil; the failure of its enemies to secure a workable just peace in the various zones of conflict; and the breakdown of social solidarity in Europe and the US and its replacement by institutionalised Islamophobia, which would generate the instability and injustice Daesh, and its like, need to keep recruiting.

It’s highly unlikely that 2016 will see the wholesale defeat of Daesh. But what should really concern us is not that failure. It’s another: the inability of Daesh’s enemies, given their multiple conflicts of interest, to replace it with a workable peaceful alternative.