You are here: Home / MidEastGulf / A new round of intimidation, arrests, and prosecution of social media users in Iran 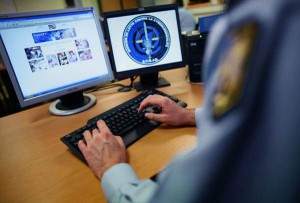 Iranian Cyber Police and Judiciary officials reported a new wave of arrests of Internet users this week. Colonel Gholamreza Kazemzadeh, Chief of Iran’s Cyber Police, told reporters on June 8 that an individual he claimed managed 23 groups on the WhatsApp and Line social media networks had been arrested.

“The Cyber Police in Shahroud [in Semnan Province] monitored virtual groups and determined that an individual with the handle of ‘Edmond’ had started 23 anti-cultural groups on the Line and WhatsApp applications. While publishing falsehoods and immoral content, these groups retained the group members’ personal information as well. Investigations indicated that he is a 27-year-old man who claims to be a Christian, and had organized 300 individuals in 23 groups on Line and WhatsApp,” Colonel Kazemzadeh told the reporters.

The Spokesperson for Iran’s Judiciary, Gholamhossein Mohseni Ejei, told reporters during his weekly press conference on June 8, that six individuals who were active on social networks had been arrested. “These individuals published illegal invitations on social networks. They were arrested by intelligence and security agents, and so far it has been determined that they had anti-security tendencies. The case is under investigation and so far five to six people have been arrested. More individuals may be detained over the coming days,” said Ejei.

In an apparent move to prepare for Iran’s next elections, held for the country’s Parliament in March 2016, Hossein Zolfaghari, Deputy Interior Minister for Security, announced on June 2 that an Elections Security Headquarters has been established inside the Interior Ministry, aiming “to monitor cyberspace.” According to Zolfaghari, the responsibility for monitoring cyberspace is upon the Intelligence Ministry, the IRGC, and the Police.

The widespread use of social networks on the Internet, especially among the young, has generated great concern among Iranian security and intelligence officials, who continue to crack down on any expression of dissent or activities they disapprove of online, in an effort to intimidate Internet users. The authorities have also put much effort into developing tools that allow them to monitor and restrict Internet access and activities.

Mohammadreza Rostami, Advisor to Minister of Sports and Youth, said on June 5 that Iranians spend an average nine hours on social networks on the Internet. “[60%] of Iranians use Facebook and spend a considerable amount of time on this network. Also, 33.2% of Iranians use the Internet every day and 25% of them use it once a week,” said Rostami.

In an interview with Mehr News Agency on June 5, Secretary of Iran’s Supreme Council of Cyberspace Mohammad Hassan Entezari, announced that henceforth cyberspace users would be identified by a government organization, but did not specify which organization is responsible for the identification. Such identification would involve obtaining and saving information on users’ age, occupation, education, home address, and computer IP, and then using the information to group users and control their level of access to the Internet based on their perceived ”risk.”

Mahmoud Vaezi, Iran’s Minister of Communications and Information Technology has repeatedly reassured the public about protecting the users’ private domain in this project. Clearly, however, such a project aims to enter and violate the citizens’ private domain in order to monitor and restrict their online activities.

Research by the International Campaign for Human Rights in Iran indicates that since April 2015, and particularly during recent weeks, there has been a marked disruption in access to Instagram, which seems to indicate progress in the government’s “smart filtering” project. According to this research, political and human rights activists are targeted as the main focus of “smart” (or selective) filtering, whereby certain images they post are routinely selected for blocking. If the same images are posted by another user, however, other users can see and access that image.

A cyberspace activist in Iran, who could not be identified for security reasons, told the Campaign that “they are in full control of cyberspace and everything is being monitored. You can feel the presence of security organizations on Instagram, Google+, and even Facebook. This level of monitoring can be the start of a new round of serious security crackdown on individuals who are trying to disseminate information through transparency. They are and will be arrested or threatened.”

On October 13, 2014, the Iranian state television’s Fars Province network reported that 11 individuals had been arrested for “insulting Imam Khomeini through sending text messages containing jokes.” An IRGC officer whose name was not mentioned in the news segment told the state television reporter that, “About 15 days ago, certain teams were assigned to monitoring the subject. After an extended and complex intelligence operation, the culprits who distributed these insults were identified in different towns.”

In his annual report published on May 22, 2015, the UN Special Rapporteur on the promotion and protection of the right to freedom of opinion and expression, David Kaye, cited blocking the Tor anonymity tool, forcing registration of IP’s inside Iran and Internet cafes, and forcing the registration of the full identities of website and cell phone owners as violations of the users’ rights.

Asked about Internet access in an interview with NBC on September 19, 2013, President Rouhani said: “The government’s view is that the people should have access to all the information in the world.” Rouhani has also defended people’s access to social networks as a necessity. In the same interview, he said: “Networks have an important role. During my election campaign, I did not have a strong team but all my supporters, especially the youth, used these social networks. They still use them and in fact monitor the government’s work. I am happy that young people are so active and even check on the government’s actions.”