You are here: Home / MidEastGulf / A new military alliance for Iran and China? 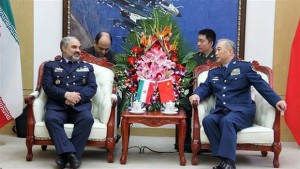 The commander of the Air Force of the Islamic Republic of Iran’s Army is in Beijing for a visit to Chinese army and discuss and sign joint agreements between two armies.

Brig. Gen. Hassan Shah-Safi and General Xu Qiliang, the deputy-executive of Central Military Commission of the People’s Republic of China met on Wednesday in Beijing. Both commanders expressed willingness to cooperate in different fields of interest.

Shah-Safi told the meeting that both countries’ armies should hold joint military drills to know mutual military capabilities and exchange experiences in the air force; he also called for finalization of the draft of agreements between Iranian and Chinese armies. “There has been a firm ground for both armies to lead a cooperation, which will be improved over time to the highest military orders; both armies have common positions in terms of having perceived of common enemies and both countries seek common objectives, that is, independence,” he emphasized.

“We believe that interference in affairs of other countries or playing with their future are not acceptable,” Shah-Safi added.

General Qiliang and Shah-Safi meeting addressed implementation of signed agreements in past meetings, exchange and sharing of experiences in air force, and a Chinese visit to Iran’s army achievements in the near future as the major issues of the meeting.

General Xu Qiliang, for his part, said that bilateral ties was being improved, and with it relations in armies had also taken a growing turn; “Iran and China are powerful countries in the world, bestowing the world with great inventions which helped improve life on earth; Chinese government highly appreciates relations with Iran and people in China, friendship with Iran is a priority,” he told the meeting.

“Iran and China are independent countries which help stability and peace in the region as well as the world,” concluded the General.