You are here: Home / MidEastGulf / A new generation of Kurdish militants takes fight to Turkey’s cities 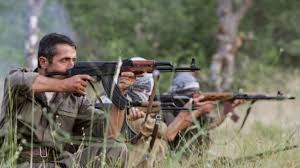 Young, urban-based fighters, many of them still teenagers, have taken centre-stage in the conflict between Kurdish militants and Turkish security forces that has flared anew in southeast Turkey since a two-year ceasefire fell apart in July.

The intensity of the violence recalls for some the 1990s, when the insurgency waged by the Kurdistan Workers Party (PKK) was at its peak and thousands were being killed annually, though the death toll remains for now well below those levels.

The fighters from the PKK’s youth wing, known as the ‘Patriotic Revolutionary Youth Movement’ (YDG-H), attack security forces in cities and towns with heavy weapons, dig trenches and erect barricades down side streets.

The police retaliate by imposing curfews and launching dragnet security operations, most controversially this month in the Kurdish town of Cizre near Turkey’s borders with Iraq and Syria where at least 20 people were killed.

More than 150 Turkish police officers and soldiers have died in the violence since July, many of them in cities and towns, government officials say, marking a departure from the PKK’s traditional focus on more rural areas.

“We are facing an effort to bring the war of armed groups in rural areas into the cities,” Turkish Prime Minister Ahmet Davutoglu told A Haber television in an interview this month.

The escalating bloodshed in Turkish Kurdistan, the mainly Kurdish southeast region, has exacerbated already sky-high political tensions in Turkey ahead of a snap Nov. 1 parliamentary election, with President Tayyip Erdogan and the ruling AK Party accusing pro-Kurdish lawmakers of being in cahoots with the PKK.

It also complicates international efforts to combat Islamic State fighters across the border in Syria: Turkey says there are links between the PKK and Kurdish groups in Syria who work with a U.S.-led alliance bombing Islamic State.

The PKK is considered as ‘terrorist’ organization by Ankara and U.S. The PKK continues to be on the blacklist list in EU despite court ruling which overturned a decision to place the Kurdish rebel group PKK and its political wing on the European Union’s terror list.

The Turkish military has resumed its attacks on PKK camps in Iraqi Kurdistan while also joining the U.S.-led campaign of air strikes against Islamic State, the hardline Islamists who have seized territory across the Turkish border in Syria and Iraq.

Inside Turkey, the YDG-H militants, largely untrained but determined to fight what they see as an oppressive Turkish state, say they have strong support from local people in a region long blighted by violence and poverty.

“There is a large mass of people who have huge sympathy and support for us. They are not armed but they do help us,” said 19-year-old Nuda, who said she had abandoned her education after high school to become a full-time insurgent.

Turkish government officials say the renewed violence in the southeast, where residents had cherished two years of calm as Erdogan’s government conducted peace talks with the PKK, has actually dented local support for the militants.

Since it was established in 1984 the PKK has been fighting the Turkish state, which still denies the constitutional existence of Kurds, with the aim of creating an independent Kurdish state.

In the 1990s, the PKK limited its demands to establish an autonomous Kurdish region and more cultural rights for ethnic Kurds,who make up around 22.5 million of the country’s 75-million population but have long been denied basic political and cultural rights, its goal to political autonomy. A large Turkey’s Kurdish community openly sympathise with PKK rebels.

Turkey’s jailed PKK leader Abdullah Ocalan was jailed in 1999 but still has considerable influence in the PKK, whose senior commanders are based in the Qandil mountains of Iraqi Kurdistan.

The YDG-H, many of whose members were born in the traumatic 1990s, was only founded in 2006. The precise nature of its relationship with the PKK leadership is unclear, though there can be no doubting its dedication to the separatist cause.

“Police and soldiers come to your neighbourhood to detain you or intimidate you. We aim to prevent them from doing that by digging trenches and barricades,” said YDG-H fighter Mawa, speaking hurriedly while his comrades nervously stood guard, looking out for security patrols.

“We have units in every street, every neighbourhood across Kurdistan,” he said, his face concealed by a scarf.

Mawa, who said he had left university after a year to join the YDG-H, joked that, at 26, he was one of the oldest members of the group.

He was standing behind a community building in the Sur district of Diyarbakir, the biggest city of southeast Turkey, where authorities imposed a brief curfew this month after YDG-H militants killed two police officers.

YDG-H members say their group has grown rapidly but refuse to give a number. Mawa and other members described it as “semi-independent” of the PKK leadership, though Ankara refutes this.

“We act in line with the rules of the (PKK) leadership and its perspective against the destructive policies of the state,” said 23-year-old Sorxin, another young militant in Diyarbakir.

“They are not flash mobs, they do not tweet each other and meet up,” said the official. “It is a structure and that structure is being directed from Qandil.”

One PKK fighter deployed to a base near the Iraqi city of Kirkuk told Reuters the reality was more ambivalent.

“They (the YDG-H) don’t have a direct relationship with the leadership because then they would be found out,” said the militant, who gave his name as “Kani Kobani”, sitting in a room with machine guns propped against the wall.

“The leadership gives general directions via TV. All the comrades watch TV. We know how to interpret the message.”

Turkey’s Anadolu Agency, citing security officials, said this month the PKK had kidnapped more than 2,000 people below the age of 18 in the past two years to be used in its attacks.

Officials say as many as 70 YDG-H militants were involved in this month’s clashes in Cizre, where police imposed a round-the-clock curfew for more than a week.

Lawmakers from the pro-Kurdish Peoples’ Democratic Party (HDP) say 21 civilians were killed in Cizre and that people went hungry for days and could not bury their dead.

Turkey’s interior minister said only one civilian and 32 militants had been killed in the Cizre clashes.

The HDP, whose success in Turkey’s inconclusive June election deprived the AKP of its single-party majority in parliament, accuses the authorities of imposing curfews in areas that support the pro-Kurdish party in order to “punish” voters and intimidate them into not participating in the Nov. 1 poll.

The government denies such suggestions, saying the curfews are aimed at facilitating its operations against the YDG-H militants holed up in urban areas.

Officials are also very aware that a heavy security crackdown could prove counterproductive by further radicalising Kurds in the countdown to the Nov. 1 election and they acknowledge that having to fight teenagers complicates the aim of defeating the PKK.

“What do you do when a 15-year-old shoots at you? You shoot back,” the foreign ministry official said. “The police have to justify their actions and it’s very controversial.”

Suleyman Ozeren, a security analyst for the Ankara-based think-tank Global Policy and Strategy, said he expected no swift resolution of the conflict.

“There’s a very thin line between the terrorists and the (local) population … Turkey can degrade the PKK but it will take time, especially in the cities,” he said.