You are here: Home / MidEastGulf / A naval battle with Iran off Yemen could scuttle the nuclear arms deal 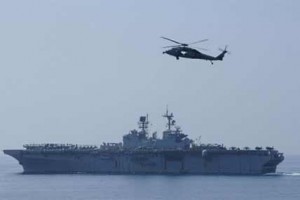 As Hot Air noted on Monday, Iran and the United States may be headed for a naval battle off the shores of Yemen, according to Examiner.

That prospect added to the impending sale of Russian made S-300 surface to air missiles to protect the nuclear bomb program Iran claims it does not have would seem to suggest that the deal to make a deal about curtailing said program is about to unravel.

The Iranians are, no doubt, counting on President Obama being so desperate to make a deal that he will swallow just about anything, even letting an Iranian flotilla through to provide arms to the rebels in Yemen backed by the Islamic Republic.

The president is, once again, in an impossible situation. If Iran tries to run the blockade and the USS Theodore Roosevelt battle group resists, then war has broken out and the nuclear deal is dead. If Obama orders the navy to stand down, then Congress will in no way sanction the deal and it is dead.

No doubt the president is betting that the Iranians will be so in awe at the fire power arrayed against them that they will back down. Certainly a President McCain or a President Romney would have been able to make such a threat stick. President Obama lacks the credibility to draw a red line in the Gulf of Aden. Too many red lines have already been drawn and crossed.

The prospect of a SAM shield being deployed in Iran must be a sobering prospect to military planners, especially in Jerusalem. If Israel wants to deny Iran nuclear weapons it may have to strike sooner rather than later. A nuclear tipped cruise missile launched by one of its Dolphin submarines at the hardened site at Fordor may well be the only resort to stop a nuclear arms race in the Middle East. In his obsession to avoid war at all costs, Obama may have just made one more likely.