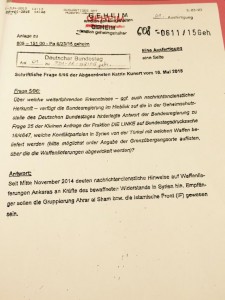 It’s a report where we see that Turkey, along with Saudi Arabia, is supporting Syrian rebels to help take President Bashar al-Assad down.

According to the document leaked from the German Intelligence Services, Turkey is providing Ahrar al-Sham and the Islamic Front with weapons.

Turkey denied the claim again in May, but it still doesn’t come as much of a surprise.

The document shows German parliamentarian Katrin Kunert’s written request from the German government on May 18.

… Question 25 asked which Syrian parties are receiving which type of weapons from the Turkish government (if possible please list border cities where deliveries take place).

Answer: Since mid-November of 2014, information from Federal German Intelligence Service indicate that Ankara delivers weapons to armed Syrian rebel groups. Recipients are said to be the groups Ahrar al-Sham and Islamic Front.

German paper Die Welt (“The World”), which published a photo of the document, seemed to confirm the document’s legitimacy when it reported Germany’s attempts to find the person who leaked it to PKK-owned media.

“The German Parliament is filing charges,” said Martin Steltner, a speaker of the prosecution, according to Die Welt. “We are investigating and the investigations will continue.”

So what’s the problem with Turkey supporting these rebels? Both Salafist groups, Ahrar al-Sham and the Islamic Front are known to have more extreme goals in the Syrian conflict. Ahrar al-Sham has partnerships with al-Nusra Front, which is affiliated with al-Qaeda and sometimes considered more dangerous than Daesh (ISIS) itself.