You are here: Home / Senza categoria / A group of Imams has launched an online magazine to counter ISIS propaganda 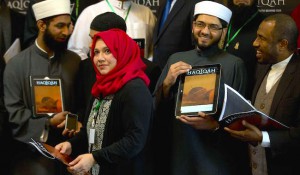 The goal of Haqiqah is “to expose the reality behind ISIS” http://www.haqiqah.org/issue/escape-from-hell/

A new online magazine, focused on fighting the Islamic State of Iraq and Syria’s propaganda and instead spreading a moderate and peaceful view of Islam, is being published by a group of concerned British imams and Muslim scholars, the Guardian reports.

The online publication is called Haqiqah and, according to its website, aims “to expose the reality behind ISIS.” The site is sleek and heavy on visuals, showcasing a concerted attempt to fight ISIS’s polished and aggressive Twitter, YouTube and web recruitment campaigns.

According to the New York Times, over 30,000 foreigners have entered Syria to date, many of them with the intention of joining ISIS.

Haqiqah is now on its second issue, the Guardian says. It focuses on the link between ISIS and the migrant crisis in Europe and also looks at how ISIS has failed to create an effective caliphate in Iraq and Syria.

“Under Daesh [ISIS] rule we have seen indiscriminate mass murder (Muslims and non-Muslims), the killing of imams and scholars that exposed them for the irreligious beings they are, the corruption of sacred laws, the destruction of mosques and places of worship, the unjustifiable enslavement of innocent young girls,” Islamic scholar Mohamed el-Sharkawy wrote in the issue published Thursday.