You are here: Home / MidEastGulf / A gathering of Armies in Northern Syria 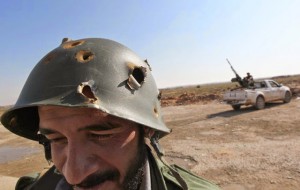 There is now a gathering of armies in northern Syria unlike any in the four-plus years of a raging civil war. The Assad regime, which was in the midst of a slow-motion collapse into its Latakia stronghold just a few months ago, is preparing for a major offensive in the important areas of Hama and Aleppo. Backed by Russian air power and an influx of Iranian and Hizballah ground forces, the Assad regime hopes to push the various rebel groups further east and north, relieving pressure from the besieged regime.

The first two weeks of Russian airstrikes have already produced limited gains by the Assad regime in Hama against rebel forces not affiliated with the Islamic State—the stated, but not actual, target of Russian airstrikes. The regime has a realistic chance at reclaiming much of Hama if Russian air support continues at its current pace and if the rebels run low on the TOW anti-tank missiles that have proved quite effective in recent battles.

A far more difficult battle awaits all sides in Aleppo—once Syria’s largest city and now a largely destroyed area of huge strategic importance, given its proximity to major roads and access to the border with Turkey. No one group can claim control over Aleppo despite continuous fighting by numerous rebel groups, the Islamic State, and the Syrian military. Western-backed rebel groups such as Liwa Suqour al-Jabal have been the target of repeated Russian airstrikes; the Islamic State has taken advantage of this and gained some ground to the north of the city. At the same time, the Islamic State is fighting regime forces holed up in an airbase outside of the city, one that is strategically important for Assad. Jaysh al-Fatah, Ahrar al-Sham, and the al-Qaeda affiliate Jabhat al-Nusra are also quite active in the north, adding to the complexity.

Reports of several thousand Hizballah fighters and several hundred Iranian troops might be exaggerated as part of the misinformation war that is raging alongside the actual fighting, but there is little doubt the Syrian regime is preparing for a serious push against Aleppo. Russian attack helicopters could play a pivotal role, since the rebel’s TOW missiles are useless against Hind MI-24 that can pin down the rebels while the Assad forces advance. Increased Russian flights over that area also increase the risk of more cross-border ‘misunderstandings’ that have infuriated Turkey and worried the United States. At no time since the start of the war have there been so many different and well-supplied forces preparing to face off in what is shaping up to be a major offensive with an uncertain outcome.

As the rebel groups prepare for an Assad offensive, they continue to fight each other and the Islamic State, particularly in the aforementioned area north of Aleppo. Some rebel groups are trying to make Hama and Aleppo the central battle of the war; the extremist Sheik Abdullah al-Muhaisan of Jaysh al-Fatah saying: ‘This is an urgent call…Please urgently notified all the military commanders and the owners of the Anti (anti-tank or anti-aircraft weapons), the snipers, etc. to support the region (Hama).’ As the disparate rebel groups gather in the contested areas, tensions and conflicts will increase between the more extremist groups and the relatively more moderate ones.

As if the situation were not complicated enough, Turkish Prime Minister Ahmet Davutoglu summoned both the Russian and U.S. ambassadors to warn against further support for the main Syrian Kurdish fighting group, the Democratic Unity Party (PYD). Ankara is more worried about Kurdish autonomy than Islamic State terrorism; its own recent air campaign has mirrored Russia’s, in that its stated target is the Islamic State while the Kurdistan Workers’ Party (PKK) bore the brunt of Turkish airstrikes in northern Iraq. The United States in particular has built a large part of its anti-Islamic State ground campaign around the PYD, who have proven to be the most consistently effective group fighting the Islamic State. Russia has also maneuvered to be seen as a partner with the Kurds, who will welcome any military support they can get. If Turkey interferes with the arming and support of the Kurds in Syria, the campaign against the Islamic State will go nowhere.