You are here: Home / MidEastGulf / A dirty bomb for Islamic State? Two arrested in Turkey with 1.2 kilos of cesium 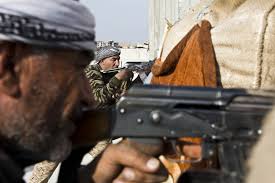 Turkish news agencies say that authorities have arrested two Georgian citizens who tried to enter the Turkey with radioactive material, including cesium.

State-run Anadolu Agency says a woman identified only as N.K., aged 43, and a man, I.A., 40, were arrested Friday at a border gate in northeastern Turkey. The agency said they entered by foot from Georgia and were acting suspiciously. A search found 1.2 kilos of the cesium.

Authorities later detained a 60-year-old Turk, and all three were brought to court.

The material was delivered to the Turkish Atomic Energy Board.

Cesium-137 is a highly radioactive substance that is a waste product from nuclear reactors. It is used for scientific purposes, but could also be used by terrorists in a dirty bomb to disperse deadly radiation with explosives.