You are here: Home / MidEastGulf / “A cub of the caliphate cubs” carries out the first beheading and IS threatens to conquer Rome 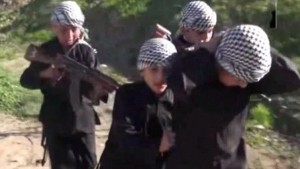 SOHR – Syrian Observatory for Human Rights – received a footage shows executing a regime officer who said that he is a captain and arrested when he was in the Western Hir Palace located in the western countryside of Homs, where they went to it after withdrawing from the city of Palmyra and entrapped al- Bosayri checkpoint leading to kill 20 members of the regime forces.

The footage also shows an IS militants and a child of “cubs of the Caliphate” beside him , where the IS militant threatened “our goal is not only Palmyra nor Homs or Damascus but our goal in to conquer Bayt al- Maqdes (Jerusalem) and Rome God willing”. At the eant of the video the IS child beheaded the office by a knife, then putting the head on the body.

It is worth mentioning that this is the first time that SOHR documented beheading a man by a child fighter of “cubs of the caliphate”, where SOHR In early January, documented the first declared execution carried out by children, where 2 children executed 2 IS members confessed of being “agents for the Russian intelligence”.

In late March, SOHR document participation of 9 children in an execution operation carried out by IS members, who are under the age of 18, in the province of Hama, where the children carried automatic rifles dragging 9 men and kneeling them  on the ground, then one of the “cubs of caliphate” distributed knives on the 9 children who beheaded the 9 men. In addition to, 25 members of “cubs of caliphate” executed 25 soldiers of the regime forces on the Roman theater of Palmyra east of Homs in May 27.