You are here: Home / Senza categoria / A ‘chicken bomb’ in Islamic State’s weaponry 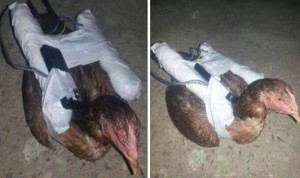 Islamic State (IS) fighters are using birds strapped with explosives to target the enemy, a media report said on Tuesday.

The report said the birds are encouraged to wander into enemy territory so that the explosive device can be detonated via remote control. However, experts believe the bizarre images could be a sign that IS is running out of supplies.

According to a report by British newspaper Daily Star, IS fighters are trying to make their own bombs using mortar shells, gas canisters and fertiliser as their delivery lines leading to Syria and Iraq have been cut.