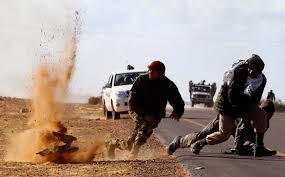 “Although the humanitarian information available is limited, an estimated two million people have been affected by the conflict,” Dujarric said.

The spokesman noted that UN agencies and national partners are assessing the humanitarian needs and have identified fuel, water, power, protection, hygiene services, health care and support to migrants as key priorities for immediate response.

Libya has witnessed a drastic escalation of violence since the 2011 turmoil, which toppled its former leader Muammar Gaddafi, and its political transition has since been mired in the endless fights between Islamist and secular factions.

Since July 13, Tripoli has endured bloody clashes between Islamist armed groups and pro-secular militias, both seeking to gain control of Tripoli’s international airport. The conflict has spread to other major cities like Benghazi, Gharyan and Zawiya.

On Aug 27, the UN Security Council adopted a resolution on Libya, calling for “an immediate ceasefire” in the country and expanding sanctions to include those involved in violence there.