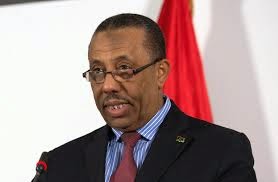 Libya’s acting prime minister sought to reassert authority over his turbulent country by naming a new cabinet on Wednesday, but some lawmakers threatened to veto his choices and a rival assembly continued to hold sway in the capital.

Abdullah al-Thinni’s administration has failed to control militia and Islamists who backed the rebellion to oust strongman Muammar Gaddafi in 2011, then kept their weapons and started to stake claims on territory, oil and other resources.

Lawmakers said he asked parliament to approve a new 16-strong cabinet, including human rights activist Farida Allaghi as foreign minister – his first new government since he was re-appointed as acting premier earlier this month.

The names were not announced publicly. But parliamentarians told Reuters Thinni had decided to name himself defence minister as well as prime minister, and that the list included some names from the previous government.

“There is a big possibility that the House of Representatives is going to reject the new government formed by acting Prime Minister Abdullah Al-Thinni, as it still includes ministers from the former government,” Benghazi lawmaker Issam Al-Uraibi told Reuters.

Thinni, a former career soldier, has been acting prime minister since March. He stood down for June elections and the new parliament reappointed him to the post at the beginning of September.

The parliament and other senior officials have been working out of Tobruk in the east of the country since fighters from the western city of Misrata seized the capital Tripoli last month.

The Misrata group has set up its own parliament and government, which are not recognized by the international community.