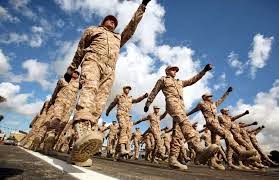 In a move apparently aimed at the Islamist militias and allied forces who have captured Tripoli and most of Libya’s second largest city Benghazi, al-Nazouri called on all members of the army to join their units immediately.

The army chief, appointed in August by the country’s new parliament, called on “Libya’s youth” to “join the jihad against the Kharijites and outlaws” – in a reference to a notoriously extreme early Islamic sect.
Months of clashes have pitted Islamist militias and local allies, including forces from the powerful western town of Misrata, against rivals in Tripoli, Benghazi and other areas.

The House of Representatives, meeting in the small eastern port town of Tobruk for security reasons, has swung behind the anti-Islamist forces, declaring the main Islamist militias to be terrorist organisations.
The Islamists in Tripoli have retaliated by reinstalling the former interim parliament, the General National Congress, whose term of office expired in February.

Libyan authorities have failed to build up coherent security forces since the downfall of Muammar Gaddafi, relying instead on a plethora of militias that sprang up during the 2011 revolt against the long-time ruler.
But those militias have now become polarised along political and regional lines, raising the prospect of nationwide civil strife.