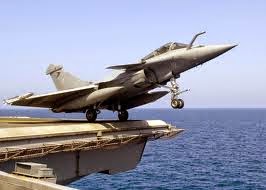 The statement from his office said the target was in northeastern Iraq but did specify exactly where, only adding: “The objective was hit and completely destroyed.” France, as well as Britain, had already sent aircraft into Iraq’s skies for surveillance missions but today’s strike was its first offensive operation against the jihadists.

US aircraft have carried out more than 170 strikes since August 8 but President Barack Obama has been keen to build a broad international coalition.

The bombing campaign was launched to protect Iraqi Kurdistan from advancing jihadists and attempt to help the autonomous region’s troops retake the ground they lost.

Jihadists who had already controlled large swathes of land in neighbouring Syria took the city of Mosul, Iraq’s second largest, on June 10 and swept through much of the Sunni heartland virtually unopposed.
In a second push in August, they dealt Iraq’s Kurdish peshmerga forces a string of military defeats and attacked various minority groups, demolished heritage sites and displaced hundreds of thousands of people.

Footage of the beheading of two US journalists and a British aid worker in Syria sparked international outrage and spurred calls for tougher action against what is widely regarded as the most violent and powerful organisation in modern jihad.