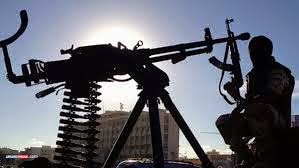 Since then, senior officials and the elected House of Representatives have lost control of ministries in the capital and have moved to Tobruk in the east near the Egyptian border.

Western powers and Arab neighbours fear Libya will break up as the country is divided among competing tribes and the armed groups that helped oust Muammar Gaddafi three years ago and now dominate the desert nation.

“What is going on in Tripoli is an attempt to divide Libya,” Prime Minister Abdullah Al Thinni, who is recognised by the international community, said in a televised address. “The government will return to Tripoli sooner than later.” “We do call on all elders to hold talks for the interest of Libya. The armed groups should surrender and leave Tripoli,” he said.

He said he would form a government to include all parts of Libyan society. He added that Libya’s oilfields were under government control.

Late on Friday, Omar Al Hasi, a prime minister appointed by the rival parliament in Tripoli, said his government was preventing the country from being destroyed.

“Inevitably we will win, inevitably we will win,” Al Hasi said at a pro-Misrata rally on Tripoli’s Martyr Square. Recalling the uprising against Gaddafi in 2011, he said: “We won in 2011 and we will win in 2014. We are going to renew the victory.” The conflict between the Tobruk-based government and the new rulers has been exacerbated by battle between pro-government forces and Islamists over control of the second-largest city Benghazi.

Around 10 people were killed in the eastern port city in the past few days including the former head of the Libyan air force and pro-democracy youth activists. Nobody has claimed responsibility for the killings.