You are here: Home / Senza categoria / Jihadists respond to U.S. aerial attacks in Syria, call by Twitter for retaliatory attacks 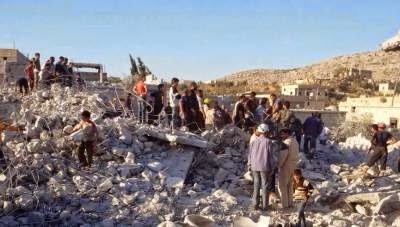 A common talking point among jihadist and jihadist-supporting Twitter accounts has been that the U.S. and the West has declared war on Islam. The account of Dutch jihadist “Israfil Yilmaz” referred to the attacks as being delivered by “cowards from the sky” and followed up, “This is like Ive said before not just a war on State, but a war on Islam, a war on the Muslims of Syria and Iraq.”

The account of Rayat al-Tawheed, a media group of IS-supporting Western fighters in Syria, echoed the same message, tweeting, “The attacks are not just on IS but an attack on Islam.”

In the same tweet, Rayat al-Tawheed followed up with another prevailing concern among jihadist accounts, stating that the U.S. offensive “will unite the ranks and we will seek one of the two victories.”
Turkish user “Ahmed ibni Hasan,” made multiple tweets to the same point, stating:

Following this message, the user then tweeted:

Somebody has to interfere and have Al-Nusra and the Islamic State make peace. No Muslim should die because of anyone’s conceit!

US alongside their Arab nations started campaign against IS ‘positions’ in Syria.. if this doesn’t unite AQ/IS nothing will

One jihadist, explained to be a fighter with al-Nusra Front, appeared in a video showing a building—allegedly an al-Nusra front headquarters—destroyed by U.S. airstrikes. In the video, titled “Verklaring Jagbhat al-Nusra,” he states that “many brothers died” and “got wounded.” He followed up, “Although things like this happen to us, we will keep on fighting the enemies.”

Other jihadist or jihadist-supporting accounts took a more aggressive tone to respond to the airstrikes, some implying or even directly calling for retaliation toward America. Rayat al-Tawheed, for example, tweeted:

We urge the brothers to carry out attacks on US soil. The fight against them is not just in Syria or Iraq. Slay them where you find them

Others tweets made the same threats to a snarkier note, with one user, “Abu Rayan #IS,” tweeting:

Roses are red,
Violets are blue,
#IS is coming,
To a town near you. 🙂

Jihadists expressed similar anger toward Saudi Arabia, which has openly declared support for attacks on IS by America. In an Arabic tweet, user ‘Al-Shaheedah# al-Khilafah” stated that if someone would provide him/her with a “bombed truck,” she/he would “pound airport of Tabuuk or any airport where their aircrafts take off from it.”

Another Arabic-writing user called for Muslims in Saudia Arabia to attack within its borders. The user, “Al-Jihad,” tweeted:

Where are men of the Two Holy Mosques country, your women have been imprisoned, tortured, and now are racing to request the bombed cars,
May your mothers lose you; go forth towards a paradise wide as much as heavens and the Earth.
Source:  siteintelgroup.com