You are here: Home / Senza categoria / Islamic State and Nusra Front move toward alliance amid coalition strikes in Syria 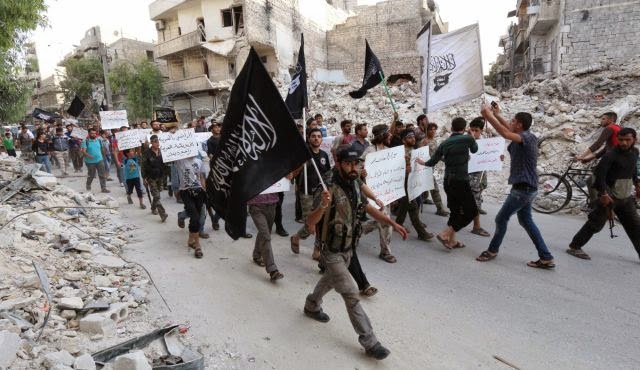 Joining forces with IS would require Nusra Front members to pledge loyalty to the group, which has declared a caliphate in territory it controls in those countries. This would effectively put an end to the Nusra Front, fighters in the group say.

Long one of the most effective forces fighting Syrian President Bashar Assad, Nusra Front was weakened this year by battles with Islamic State, an Al-Qaida splinter group that routinely employs ruthless methods such as beheadings and mass executions. The two share the same ideology and rigid Islamic beliefs, but fell out during a power struggle that pitted IS head Abu Bakr al-Baghdadi against Al-Qaida chief Ayman al-Zawahri and Nusra Front leader Abu Mohammed al-Golani.

But the U.S.-led air and missile strikes, which have hit Nusra Front as well as Islamic State bases in Syria, have angered many Nusra members who say the West and its allies have joined forces in a “crusader” campaign against Islam.

According to a report in The Guardian, Nusra Front units in north Syria have made peace with the Islamic State, and a senior source told the newspaper that leaders of both groups are holding war planning meetings, although they have yet to formally join forces.

Sources close to Islamic State told Reuters that some Nusra fighters were joining them after the strikes and there was a growing sense among many that it was time to put their differences aside.

Others think a formal merger is unlikely. “There are hardline voices inside Nusra who are pushing for reconciliation with Islamic State,” a source close to Nusra’s leadership said, though he doubted it would happen. “I know Golani. He would never reconcile with Islamic State. If he ever does it, it would be in a direct order from the leadership, and that is al-Zawahri himself.”

However, one Islamic State fighter said he believed there was an “80 percent chance that the brothers of Nusra will join the State.”

The Syrian Observatory for Human Rights, a Britain-based monitoring group, said on Friday over 200 fighters had joined Islamic State in the northern Aleppo area, many from the Nusra Front, since U.S. President Barack Obama said he was prepared to strike the group in Syria.

In an audio message posted on militant forums on Thursday, a senior Al-Qaida figure warned Muslims against joining Islamic State and called on fighters in Syria to “rescue the ship of jihad, and reach it before it deviates from its course.”

No trust
Even before the air strikes, Nusra Front was losing fighters to Islamic State, which is seen as more organized and determined to impose Islamic rule.

“This goes without saying, this is a crusader war that includes all infidel nations against the Islamic State,” said Nusra Front commander Abu Mussab al-Makdessi in a voice message posted in jihadi forums online in response to a question from an Islamist about the group’s reaction to the strikes.

“Regardless of what happened between us, they remain our brothers, and the ideological bond between us is stronger than anything. We are ready to fight by their side … our blood is their blood.”

One former Nusra fighter inside Syria said the air strikes had strengthened Islamic State’s position even further. “Nusra is in a very difficult situation. I think now it should just announce the end of itself. Zawahri has to be brave,” he told Reuters. “It is no longer like the old days. He needs to understand this. This is a new era with a caliph,” he said.