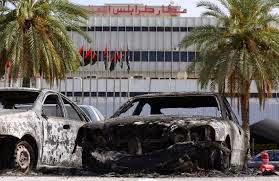 Dozens of soldiers were killed and more than 70 wounded in car bomb attacks and clashes between troops and Islamists around Benghazi airport, a Libyan army spokesman said on Friday, as the UN threatened sanctions.

“Thirty-six soldiers were killed on Thursday in three car bomb attacks, followed by fighting between the army and Islamists”, a special forces unit spokesman said.
Two car bombs exploded when an army convoy travelled past close to the airport, taking out three soldiers, the spokesman said.
Later, a third bombing attack struck, also near the airport.
Libya has been sliding into chaos since longtime leader Muammar Gaddafi was toppled in a Nato-backed uprising three years ago, with interim authorities confronted by powerful militias that fought to oust him.
Parliament, which was elected in June, is recognised by the international community but contested by the militia controlling capital Tripoli and Islamists holding much of the eastern city of Benghazi.
The cradle of the uprising, Benghazi is now the regular scene not only of fighting but also the murder of members of the security forces, political activists and journalists.
The Islamists have since September sought to seize control of Benghazi airport — the last remaining bastion in the city of forces loyal to former general Khalifa Haftar, who launched a military campaign against the insurgents in May.
On Wednesday, militiamen of the Shura Revolutionary Council, which includes Islamist group Ansar Al Sharia, launched a fresh assault on the airport, which has both civilian and military airfields.
General Saqer Al Jerushi, an aide to Haftar, said warplanes and helicopters were being used to repulse the Islamists’ advance on the airport.
In New York, the UN Security Council on Thursday threatened sanctions against those who reject peace in Libya.
In a unanimous statement, the 15 members of the council “expressed their readiness to use targeted sanctions, including asset freezes and travel bans, against individuals or entities that threatened Libya’s peace and stability or undermined its political transition”.
The move is an apparent bid at shoring up UN-brokered talks on ending the violence.
A first round of talks were held on September 29, but the militia controlling Tripoli and jihadists in Benghazi have rejected the peace initiative.
Another round of talks is scheduled after the Eid Al Adha holiday, which ends on Sunday evening.
The soldiers wounded in Thursday’s violence have been taken to hospital in Al Marj, 100 kilometres east of Benghazi.
At the same time, a source at Benghazi’s Al Hawari hospital said 23 wounded Islamists had been admitted there, some of them in critical condition.
A health ministry official said 79 people were killed in Benghazi in September.
Human Rights Watch said more than 250 have lost their lives there and in Derna, another Islamist stronghold further east, since the beginning of the year.Source:  gulfnews.com