You are here: Home / Senza categoria / Lebanon, with friends like these, who needs enemies? 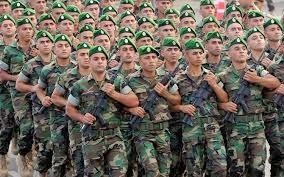 In multi-factional states in particular, stable institutions are the best guarantee of a secure nation. Anyone who looks into the history of Lebanon since 1943 cannot fail to notice that whenever the army was safe and cohesive, so was Lebanon itself.

At this juncture, I feel I must mention Fouad Chehab, the Lebanese president from 1958 to 1964, perfectly personified this fact throughout his military and later political career. Chehab, frequently regarded as “the Father of the Army,” and near-unanimously considered Lebanon’s greatest president, was no ordinary politician.

So it is a pity that the ignorant gangs and thugs, who took to the streets last week “in defence of the army” as a reaction against a critical post on Twitter by an Arab TV anchor, know nothing about Chehab’s legacy, his role, his beliefs about the importance of institutions, or his absolute belief in the unity of Lebanon and how to keep it safe and secure.

Those ignorant gangs and thugs did not realize that the army, as well as other national institutions, do not need loud slogans, empty boasts, demagogic tweets, but rather wise citizens who are aware of what threatens the existence of these institutions and undermine its neutrality. The army, the police, or the judiciary must not be closer to one Lebanese faction than another, and no faction should ever claim it “loves” the army more than others.

Indeed, the Lebanese have experienced such excessive “love” for the army and Lebanon at the onset of the Lebanese War during the 1970s. The result was the collapse and fragmentation of the army, and Lebanon’s very existence as a state imperiled during a civil and regional war that lasted for more than 15 years.

I remember well what happened to the Lebanese army then, and who was working to break it up as a path to dividing and subjugating the country. I also remember how the army lost its cohesion and national support when one Lebanese faction claimed that it alone “loved” and supported it to the exclusion of other factions. Eventually, all Lebanese paid a heavy price for pushing the army into confrontations in the absence of national consensus.

Chehab, who had no children of his own, regarded the army as his child. He cared for it, and knew how dangerous it would be for it to become a vehicle for the whims of politicians. He also profoundly understood, upon taking over as president in 1958 during the height of the Cold War, how dangerous the repercussions of the Cold War, regional tensions, and international rivalry, were; thus he was keen to keep both the country and the army away from the conflicts that were boiling around Lebanon.

Chehab hailed from a princely Sunni Muslim clan that claims descent from the Quraish, Prophet Mohammed’s (peace be upon him) own tribe. However, the branch he was born into had converted to Maronite Christianity during the 18th and 19th centuries. This background helped make him a moderate who rejected religious bigotry, and a strong believer in a Lebanon devoid of sectarian privileges and discrimination. Furthermore, his military upbringing and career ensured his strong commitment to state institutions, which he believed were more important and more permanent than any traditional leadership.

True to form, it was Chehab who was the real founder of the modern state of Lebanon through his far reaching reforms of the civil service, the treasury, and the judiciary. His contemporaries fondly recall his trade-mark quote “let’s see what the book says”—alluding to the constitution—whenever ministers and parliamentarians disagreed on political and legislative issues.

Thus, he was a real statesman, not a street bully or a populist charlatan who makes a habit of covering up his mistakes by deluding his followers and selling them out. He believed to the end that the army’s role was to defend the country as a whole, empowered by a national mandate, and not hired or mortgaged or used in internal conflicts. His unshakable conviction was that the national army must be above all parties.
Following the Arab defeat in the 1967 war, however, the prestige of the Arab political system suffered a near fatal blow, while what was then called the “peoples’ liberation war” gained credibility, led by the armed Palestinian movement, the Fedayeen. In Lebanon, the ascendancy of the Fedayeen led to resentment and a counter-reaction among the Christian community.

As a result of the Muslims’ whole-hearted support of the Palestinian fighters, the failure of Lebanon’s leaders to prevent polarization, and Israel’s exploitation of the situation, the Lebanese Army fought the Fedayeen in 1973. This was a bleak precursor that destroyed the army’s reputation for impartiality, and within only two years—in 1975—disaster struck and the Lebanese War erupted.

During this war Chehab’s army disintegrated, splitting into different forces: the Sunni and Shi’ite-dominated Lebanese Arab Army, the Christian 8th Brigade, the Druze 11th Brigade, and the Israeli-supported South Lebanon Army with Saad Haddad, and later Antoine Lahad, as its nominal commanders.

This state of affairs continued until the war officially ended with the signing of the Taif Agreement, an accord which was, in fact, opposed by the most influential players in the Lebanese arena today.
These players are now preventing the election of a new president, and calling for military and intelligence cooperation with the Assad regime along the border with Syria. We should remember that it is these same players who helped erase the borders between Syria and Lebanon a couple of years ago, when they sent armed militiamen into Syria to fight against the anti-Assad rebels. Today, they are trying to use the Lebanese Army as a cover in their fight against the Syrian rebels—as well as extremist groups—who have crossed the now-defunct border and into Lebanon.

Such a situation should not have come as a surprise, given the exposure of the former Lebanese government’s policy of “distancing” the country from the Syrian conflict as a fallacy.
The Lebanese troops now held hostage by the extremist groups the international community is fighting are indeed the sons of all of Lebanon. They are innocent of any kind of political allegiance, and were not consulted before they were sent to the front-lines at Arsal.

On the other side, those who thought they could control the rules of military engagement in both Syria and Lebanon must be held responsible, more so since there were already some worrying signs.
The killing of the Sunni cleric Sheikh Ahmad Abdul-Wahed weakened the great respect the Lebanese army had enjoyed in Akkar (in north Lebanon), and area nicknamed “the army’s human reservoir,” from which came the largest number of the army’s martyrs during the Nahr al-Bared battle in 2007. This was followed last year in southern Lebanon where the movement of another Sunni cleric, Sheikh Ahmad al-Assir, was destroyed, amid reports that fighters from Hezbollah fought alongside army regulars.

Now the army finds itself in a bloody, sectarian quagmire. This is a catastrophic scenario for the army built by Fouad Chehab, and upon examining the record of those who are now expressing their “love,” and are thus gambling with the army’s future, one should really worry.
Among those people is a man with a longstanding and burning ambition to be president, and who, years ago, left his troops defenseless and ran away to seek refuge in the French embassy in Beirut after a quixotic battle with Syrian troops, a battle that ended with Damascus re-imposing its influence over Lebanon.

Another is a faction that views the Lebanese army, as well as all state security bodies, as mere auxiliaries to a de facto “resistance” movement that receives its orders from overseas.
May God protect the Lebanese Army from its false friends, as it is more than capable of dealing with its enemies.