You are here: Home / Senza categoria / Islamic State is arrived in Libya 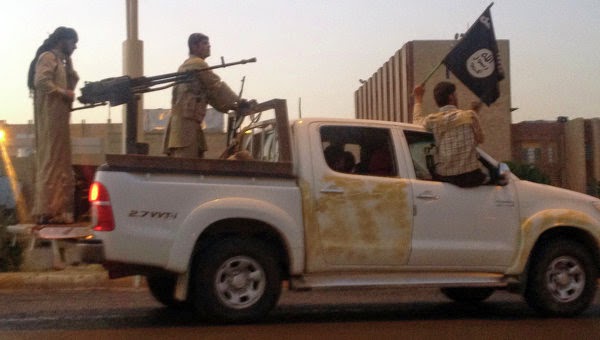 Islamic State (IS) militants have appeared in the eastern Libyan city of Derna for the first time, shouting out extremist slogans and displaying IS flags, Sky News Arabia reported Monday.

A photograph published by Sky News Arabia shows IS militants driving in a car along a city street, with the militants sitting in the trunk waving black IS flags.

Libya is currently facing its worst wave of violence since the 2011 overthrow of Muammar Gaddafi and the subsequent civil war. After the conflict, the country has seen violent clashes between numerous militias, armed with weapons seized from government ammunition depots.

The IS extremist group has proclaimed a caliphate on the vast areas it had seized across Iraq and Syria. The United States has been carrying out airstrikes against IS targets in Iraq since August.

In September, US President Barack Obama announced his strategy aimed at defeating the IS and preventing it from spreading across the Middle East. A US-led coalition started conducting airstrikes against the IS in Syria the same month, while simultaneously continuing airstrikes in Iraq.