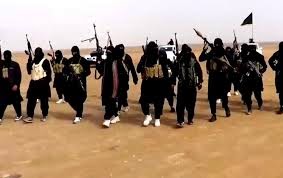 Libya’s Islamist militant group Jaish Al-Islam has called on residents in the eastern port city of Derna to support the Islamic State of Iraq and Syria (ISIS), sources and local eyewitnesses have told Asharq Al-Awsat.

This development, which is likely to stoke fears that Libya’s ongoing fragmentation may make it a safe haven for violent militant groups, comes as Libyan Prime Minister Abdullah Al-Thani prepares to visit Cairo on Tuesday to discuss the fight against militant groups in the region with Egyptian President Abdel-Fattah El-Sisi.

Eyewitnesses and local sources told Asharq Al-Awsat Jaish Al-Islam held a large rally in the city’s Sahaba Square under the banner ‘The caliphate following the Prophetic way’ on Sunday in front of hundreds of residents.

During the rally, two speakers appeared on the stage, which was covered in ISIS flags, and called on the crowd to abandon the “infidel ideas and principles” underlying the modern Libyan state and join what they referred to as the “Islamic state” or the “caliphate” by swearing allegiance to ISIS and to Jaish Al-Islam’s leaders.

Eyewitnesses said one of the men was a Saudi national known as “Abu Habib,” whom they identified as the man heading the local Shari’a court which the group had set up in the city. They said the other man on stage was Egyptian but neither his name nor his nom de guerre were known.

Last Friday, the same group held a military parade through the streets of the city, long seen as a hotbed for recruiting Islamist fighters, and which was completely abandoned by the army since Islamist militant groups took over. They have also bolstered their presence in the city by forming two local security bodies, an “Islamic police force” and a “municipal Islamic guard.”

Local sources also said Libyan military jets had carried out airstrikes on the city for the second day in a row, and that they had heard anti-aircraft missiles being launched in response from various locations.
Since the downfall of Libya’s former dictator Muammar Gaddafi in 2011, various interim Libyan governments have struggled to establish security and the rule of law in the country, which lacks a functioning police and army while being awash with military weapons.

Forced to rely on a patchwork of revolutionary militias, Libya’s government has been unable to prevent the outbreak of fighting between different factions, with different militias with varying ideological and regional loyalties fighting it out for control of key areas and resources.

In the latest setback, a coalition of militias based in the western city of Misrata seized the Libyan capital of Tripoli in late August, and have refused to recognize the authority of the parliament elected in June, forcing it to move to Tobruk.

Prime Minister Abdullah Al-Thani, who heads the interim government currently based in Tobruk, travels to Cairo on Tuesday to meet with Egyptian President Abdel-Fattah El-Sisi to discuss the fight against Islamist militant groups in the region and general security matters.

An informed source in Thani’s office told Asharq Al-Awsat the visit comes on the back of an official invitation from Sisi, with the meetings aiming to strengthen official relations between the two north African neighbors and discuss Egypt’s role in helping Libya combat the militant groups currently in control of a number of areas in the country.