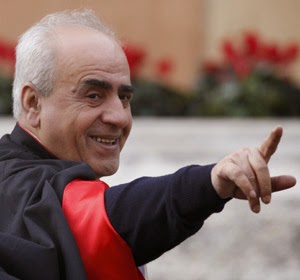 A prominent bishop on Wednesday accused Turkey of preventing Christians from fleeing Syria while allowing terrorists responsible for their persecution to cross its border unchecked.
Jacques Behnan Hindo, the Syrian Catholic Archbishop of Hasakeh-Nisibi, made the claim on Vatican Radio, a day after the ISIS group abducted at least 150 Assyrian Christians from villages which had been under the control of Kurdish forces.
“Every day, families are emigrating from Damascus by plane because of the blockade we have around us,” the bishop said.
“In the north, Turkey allows through lorries, Daesh (ISIS) fighters, oil stolen from Syria, wheat and cotton: all of these can cross the border but nobody (from the Christian community) can pass over.”
The abducted Christians were part of Syria’s tiny Assyrian community, which is mostly based in Hasakeh province near the Turkish border.
There were just 30,000 Assyrians in Syria before the country’s conflict erupted in March 2011.
At that point Syria had an estimated total Christian population of around 1.2 million people. Pope Francis is among those who have voiced fears the community could be decimated by mass emigration as a result of the conflict.
Control of Hasakeh is currently divided between Kurdish forces and ISIS fighters.
The bishop said he was hopeful the ISIS offensive which led to the kidnappings would soon be over “because the Kurds are gathering their forces to go and fight them.”
But it is reported that ISIS militants are planning to murder 150 Christian hostages they kidnapped after sweeping through villages in Syria if the U.S. does not stop air strikes, it has been reported.
Nearly 1,000 Assyrian Christian families have fled their homes in northeastern Syria after terrorists kidnapped dozens of members of their community, an activist said on Wednesday.
Osama Edward, director of the Sweden-based Assyrian Human Rights Network, said they had fled in fear after terrorists from the ISIS group took the Assyrian Christians hostage early this week.
Source: ABNA