You are here: Home / Senza categoria / Sunni reawakening in Iraq hinges on US push for national guard 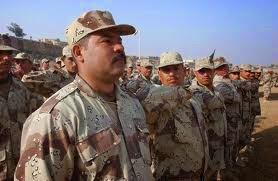 The US-backed plan for an Iraqi national guard to recruit and support Sunnis fighting the militant group ISIL, a linchpin of president Barack Obama’s strategy, faces an immediate political test and an uncertain outlook.

Pressed by the Obama administration, new Iraqi prime minister Haidar Al Abadi is scheduled to send parliament legislation on Tuesday aimed in part at reprising the Sunni Awakening movement that fought Al Qaeda alongside the US military in Anbar province a decade ago. Locally recruited guard forces would provide Sunni boots on the ground to combat extremists in provinces hostile to Iraq’s Shiite-dominated military.

Parliament is the first of many hurdles for the plan, which has drawn a mixed reaction from Sunni leaders even as ISIL expands its hold on Sunni communities, including in Anbar. A guard wouldn’t be a quick fix to the current crisis because US officials estimate it may take as long as a year to raise, vet and train forces.

“I question whether Iraq units, which are going to be fashioned out of a few tribal fighters here and a few formerly disgruntled soldiers, will quickly have the capacity” to conduct anti-insurgency activities, said Michael O’Hanlon, military analyst with the Brookings Institution in Washington.

A more controversial aspect has received little public debate in Iraq or the US: forming effective Sunni National Guard units would require deploying several thousand more American advisers, Mr O’Hanlon said. Currently, about 1,600 US troops are in Iraq or headed there for military coordination, intelligence and security functions operating in Baghdad, the capital, and in Erbil in the Kurdish region.

The debate in parliament will be a political test for Mr Al Abadi, whose predecessor Nouri Al Maliki opposes the guard plan, sayimng it will weaken the central authority needed to keep Iraq from disintegrating. Kurdish officials may oppose the measure because they don’t want to merge their peshmerga militia into a national guard, just as it’s unclear whether Shiite leaders – and their Iranian backers – would yield control of their sectarian militias.

Guard units, while operating under the authority of provincial governors, would be paid and equipped by the central government and ultimately be accountable to the prime minister as Iraq’s commander-in-chief. Mr Al Abadi has hinted at concerns that Sunni units of a national guard might become a rogue force for tribal leaders opposed to the central government.

“I cannot start any recruitment without the proper legal framework,” MAr Al Abadi said in an interview last month on the sidelines of the United Nations General Assembly in New York. “We don’t want to end up forming another militia.”

Mr Al Abadi said the plan reflects his view of the need to devolve power to the provinces as a long-term solution to the tensions among Iraq’s Shiites, Sunni Arabs and Sunni Kurds.

“I think he is personally committed to it,” said Norman Ricklefs, president and chief executive officer of the Iraq Advisory Group, a consultancy based in Dubai that has advised the US military and the Iraqi government. “I don’t think it’s just an American plan, but I think he wants to be careful in case it doesn’t work out that he’s got a bit of flexibility and can distance himself from it.”

While governors of the main Sunni provinces have said they are prepared to raise thousands of men for a national guard force, some Sunni tribal leaders are wary of or oppose the plan. Sheikh Wasfi Al Asi, one of six Sunni tribal leaders who met in Baghdad recently with retired General John Allen, the US special envoy, said the plan is vague and many issues remain to be resolved.

“Frankly speaking, the idea of the national guard is not clear, only thoughts and ideas presented by Americans and the Iraqi government,” Mr Al Asi said in a phone interview.