You are here: Home / Senza categoria / Resolve the Libyan crisis 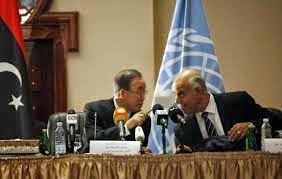 He voiced concern over the growing militancy trends in the country, and said Libya had seen enough of killings. The concern expressed by the world body chief is laudable from the point of view that Libya had been put on the back burner for quite some time, especially owing to the fact that it houses no such element as the ISIS, and the infighting is all among the thugs and despots of the strife-torn country.

It is widely hoped that the UN-brokered talks that are being held between rival parliamentary factions will enable them to post a stable and efficient government in the near future, and pull the country out from the abyss of lawlessness and parochial sentiments.

The fact that Ban was accompanied by Italian Foreign Minister Federica Mogherini, who is scheduled the take over the office of European Union Foreign Policy chief, illustrates the level of importance that Libya is once again attaining in the scheme of diplomacy.

Britain and France, which had been at the vanguard of the struggle to oust Gaddafi, should return to the marshlands of Libya with a proactive policy to rebuild the country and let a culture of tolerance and accommodation take roots.

The crisis in Libya is more than fighting the menace of lawlessness. Instability has plagued the oil-rich country and the newly elected dispensation had not been able to assert itself. Apparently that is why the parliament could not meet in Tripoli, due to militants’ pressure, and is meeting 1,000 kilometres away from the capital.

This tantamount to Libya in the making as a failed state, as there is hardly any centralised authority at work. The writ of the state is in the thin air, as three prime minister since 2011 have walked out, being unable to form a stable and workable government.

The prime issue that needs to be addressed is the surge of militant groups, and that too divisive on tribal and ethnic considerations. Apart from enabling the parliamentarians to resolve their differences, the UN should also broker reconciliation among the militant groups to bring them into a nexus of governance that is lawfully viable.

This current trend of marginalisation and going solo has rented the republic’s image and threatens its survival. The way militant groups are selling oil in the international market and indulging in parallel trade activity is unacceptable. Some out-of-box solution is the need of the hour.