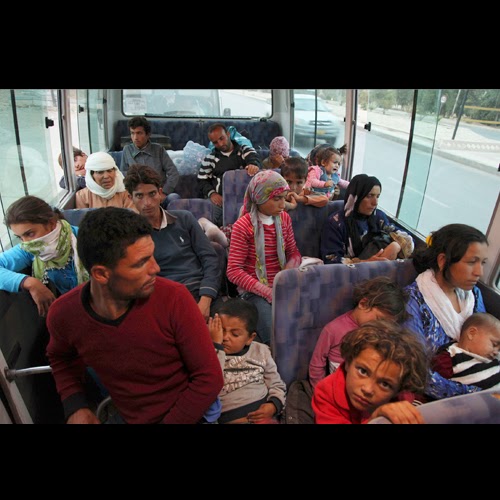 Fighting in Iraq’s western Anbar province has forced up to 180,000 people to flee since the city of Hit fell to Islamic State earlier this month, the United Nations said on Monday.

Islamic State fighters extended that advance by overrunning a military base that the Iraqi army had abandoned 8 km (5 miles) west of Hit earlier on Monday, according to an army officer and members of a government-backed Sunni militia.

Islamic State has been on the offensive in the desert province of Anbar, bordering Syria, in recent weeks, taking the town of Hit on October 2 and nearby Kubaisa on October 4.

That has raised concerns in the West because it is close to Baghdad and demonstrates the group’s reach; while operating successfully in Anbar, it is also on the verge of taking the strategic town of Kobani hundreds of miles away in northern Syria on the border with Turkey.

There was no claim of responsibility for the bombings, but Islamic State claimed a string of attacks in Baghdad on Sunday that left 45 dead.

As a result of the fighting and air strikes in Anbar, carried out by the Iraqi government and a United States-led military coalition, up to 30,000 families or 180,000 individuals have fled Hit, the UN’s Office for the Coordination of Humanitarian Affairs said.

The war in Anbar and its conquest of Mosul have allowed Islamic State to hold territory from eastern Syria across Sunni parts of Iraq with the goal of establishing a caliphate.

Suicide bombers
In northern Syria, three Islamic State fighters blew themselves up on Monday in Kobani, a monitoring group said, with the hardline militants making slight advances inside the besieged Kurdish town.

The Syrian Observatory for Human Rights monitoring group reported more heavy fighting on Monday inside the city, where US-led air strikes have so far failed to halt the militants’ advance.

Rami Abderahman of the Observatory said one of the suicide attacks targeted a bus station in the northwest of Kobani and that the group had taken around 50 percent of the town.

“They now control the cultural centre, which means they have advanced further inside the town,” he said.
The Observatory said there had been at least five US-led strikes early on Monday, mainly targeting southern districts of Kobani, which is known as Ayn al-Arab in Arabic. Clashes also continued to the east, killing a dozen Islamic State fighters.

The militant group wants to seize the town to consolidate a dramatic sweep across northern Iraq and Syria.
The United States and Saudi Arabia launched eight air strikes on Sunday and Monday against Islamic State targets in Syria, including seven near Kobani, the US military said.

Denial
In a blow to US hopes, Turkey denied it had agreed to let the United States use its Incirlik air base in the fight against Islamic State, and sources at the Turkish prime minister’s office said talks were continuing on the subject.

Turkey had however reached an agreement with Washington on training Syrian rebels, the sources told reporters, without saying who would train the insurgents or where.

The comments come after US National Security Adviser Susan Rice said Turkey had agreed to let forces from a US-led military coalition use its bases for activities inside Iraq and Syria and to train moderate Syrian rebels.

Syria’s air force meanwhile carried out strikes against rebels at more than double its usual rate on Monday, according to the Observatory.

The intensified air strikes by President Bashar al-Assad’s government will add to the fear among Assad’s opponents that he is taking advantage of the US strikes to crush other foes, including the “moderate opposition” that Washington backs.

The United States says it does not want to help Assad’s government despite bombing Islamic State, the most powerful group fighting against Damascus in a three-year-old civil war. Washington aims to help arm moderates to fight against both Assad and Islamic State.

But within days of the start of US air strikes in Syria last month, Assad’s government stepped up the tempo of its own air campaign against rebels closer to the capital Damascus.

The Observatory said the Syrian air force had struck 40 times on Monday in areas in Idlib and Hama provinces, including dropping oil drums packed with explosives and shrapnel.

Typically Damascus has carried out no more than 12-20 raids a day.