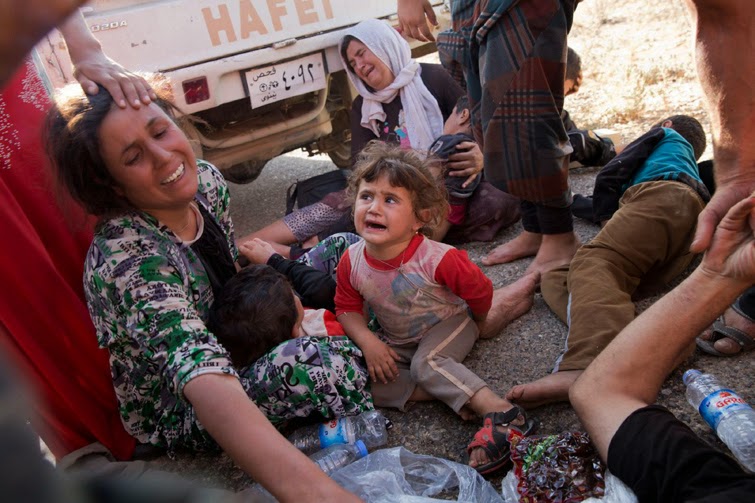 LoStato islamico dell’Iraqedel Levante(ISIL)ha cercato goffamente di “giustificare”la riduzione in schiavitùdellaminoranzaYazidinella rinascitadiuna anticausanza diutilizzaredonne e bambinicome bottino di guerra.In un articolo in lingua inglese pubblicato sulla rivista online dell’Isil, “Dabiq”, il gruppo offre quello che sostiene essere una giustificazione religiosa per l’asservimento dei vinti “idolatri”.
The ancient custom of enslavement had fallen out of use because of deviation from true Islam, but was revived when fighters overran Yazidi villages in Iraq’s Sinjar region, according to the article.
“After capture, the Yazidi women and children were then divided according to the Shariah amongst the fighters of the Islamic State who participated in the Sinjar operations, after one fifth of the slaves were transferred to the Islamic State’s authority to be divided as khums,” it said. Khums is a traditional tax on the spoils of war.”This large-scale enslavement of mushrik (idolator) families is probably the first since the abandonment of Shariah law,” it said.

Dabiq, distributed in a slickly-produced online format, is described by the group SITE that monitors militant publications as ISIL’s English-language magazine.

The cover shows a picture of St Peter’s Basilica in Rome, with an ISIL black flag superimposed in place of the cross atop its obelisk. Inside it features photos of the group’s arsenal of heavy weaponry and what it says is the final letter to his mother from an American journalist the group beheaded.

The article on slavery confirms practices documented by Human Rights Watch, which says Yazidi women and girls were forced to marry ISIL fighters and shipped out in busloads from Iraq to Syria to be sold off as prizes.

ISIL practices a harsh form of Sunni Islam and has declared its leader Abu Bakr al-Baghdadi the ruler of the entire Muslim world. Mainstream Sunni scholars around the world have denounced the group and its interpretation of Islam.

The group has hounded ethnic and religious minorities in northern Iraq since seizing the city of Mosul in June, killing and displacing thousands of Christians, Shiite Shabaks and Turkmen who lived for centuries in one of the most diverse parts of the Middle East.

US President Barack Obama justified his decision to bomb ISIL targets in August in part because the group was poised to commit what he called “genocide” against Yazidis, who were trapped at the time on a mountaintop after fleeing an ISIL assault on their towns and villages.

Yazidis, who follow an ancient religion derived from Zoroastrianism, have faced some of the harshest penalties from ISIL, which regards them as devil-worshippers.
The Dabiq article said fighters were reviving a practice of the companions of the Prophet Mohammad by enslaving enemies. Enslaving women and forcing them to become wives reduces sin by protecting men from being tempted into adultery, it said.

“One should remember that enslaving the families of the (non-believers) and taking their women as concubines is a firmly established aspect of the Shariah, that if one were to deny or mock, he would be denying or mocking the verses of the Quran and the narrations of the Prophet,” the article said.
Many of the captives had “willingly” accepted Islam, the group said, “and now race to practice it with evident sincerity after their exit from the darkness of idolatry.” Mothers had not been separated from their young children, it said.

US-led air strikes have halted ISIL advances in the north of Iraq, allowing Kurdish forces to regain ground. Many of the Yazidis trapped on the mountain they consider a holy site, Mount Sinjar, were eventually able to escape, but their nearby villages are still under militant control.

On Sunday, Human Rights Watch said ISIL was holding hundreds of Yazidis captive in both Iraq and Syria and that the group had systematically separated young women and teenage girls from their families, forcing some into marriage with fighters.
Fifteen-year-old Rewshe, one of several Yazidi girls who escaped ISIL captivity and spoke to Human Rights Watch, said ISIL fighters transported her with about 200 Yazidi women and girls on a convoy of four buses to Raqqa, their de facto capital in Syria.

An ISIL commander sold her and her 14-year-old sister to a fighter, who told her with pride that he had paid $1,000 for her, she said. The fighter sold her sister to another fighter, Rewshe said. She escaped through an unlocked door while the man who bought her slept.

“The statements of current and former female detainees raise serious concerns about rape and sexual slavery by Islamic State fighters, though the extent of these abuses remains unclear,” Human Rights Watch said.
“The Islamic State’s litany of horrific crimes against the Yezidis in Iraq only keeps growing,” said Fred Abrahams, special adviser at Human Rights Watch.