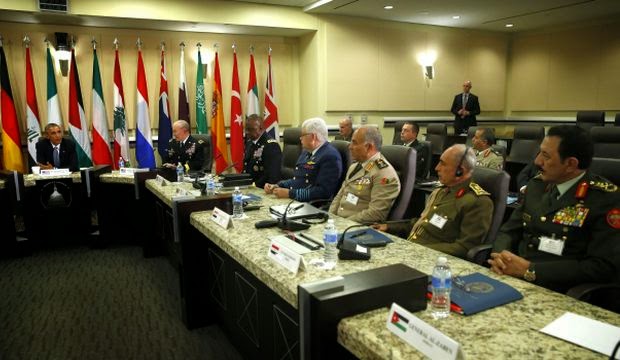 President Barack Obama on Tuesday told military leaders from more than 20 countries working with Washington to defeat Islamic State of Iraq and Syria (ISIS) militants that he was deeply concerned about the radical group’s advances at the north Syrian town of Kobani and in western Iraq.

But Obama did not hint any changes to what he saw as a long-term strategy that would see ups and downs in the months ahead, even as pressure builds for the coalition to stop ISIS from taking control of more territory.

“This is going to be a long-term campaign,” Obama told the defense chiefs during a meeting at Andrews Air Force Base, outside Washington.

He spoke after US-led air strikes had pounded ISIS targets around Kobani near the Turkish border, where Kurdish fighters are struggling to repel an onslaught by the radical Islamist group.

He said at this point there was a focus on the fighting in Anbar, adding: “And we’re deeply concerned about the situation in and around the Syrian town of Kobani, which underscores the threat that [ISIS] poses in both Iraq and Syria.”

US troops had battled hard to secure Anbar against Al-Qaeda militants during the Iraq war but it is now at risk of being taken over by ISIS militants.

“Coalition air strikes will continue in both of these areas,” Obama said.

The meeting of military chiefs from 22 countries included representatives from Turkey and Saudi Arabia and was led by General Martin Dempsey, chairman of the US Joint Chiefs of Staff.

A US military official told Reuters after the talks that there was an acknowledgement that ISIS was making some gains on the ground, despite the air strikes. But there was also a sense that the coalition, working together, would ultimately prevail, the official said.

“In the short term, there are some gains that they have been able to make. In the long term, that momentum will be reversed,” the official said, adding the coalition would adjust its tactics as ISIS fighters increasingly blend into the population and become harder to target.

Alistair Baskey, spokesman for the White House National Security Council, said the meetings were “part of ongoing efforts to build the coalition and integrate the capabilities of each country into the broader strategy.”
Obama said the campaign was still in its early stages.

“There will be days of progress and there are going to be some periods” of setbacks, he said, but added that “our coalition is united behind this long-term effort.”

The US military announced that US and Saudi planes had carried out 21 air strikes in the last two days near Kobani, the most intense attack yet after days of air strikes.

US Central Command said the strikes on the militants’ staging areas, compounds and armed vehicles, were meant to hit supply lines and stop reinforcements. It said the situation was fluid but the Kurdish militia was “continuing to hold out.”

Ankara has come under pressure to play a more active role against ISIS, and this week agreed to help equip and train some Syrian armed groups fighting the militants, as well as the Syrian government.

US and Turkish officials say talks are under way between the two countries on allowing the use of Turkish facilities for countries engaged in the campaign against ISIS.