You are here: Home / Senza categoria / Jihad Through Shakespeare: The Islamic State’s Outreach to the West 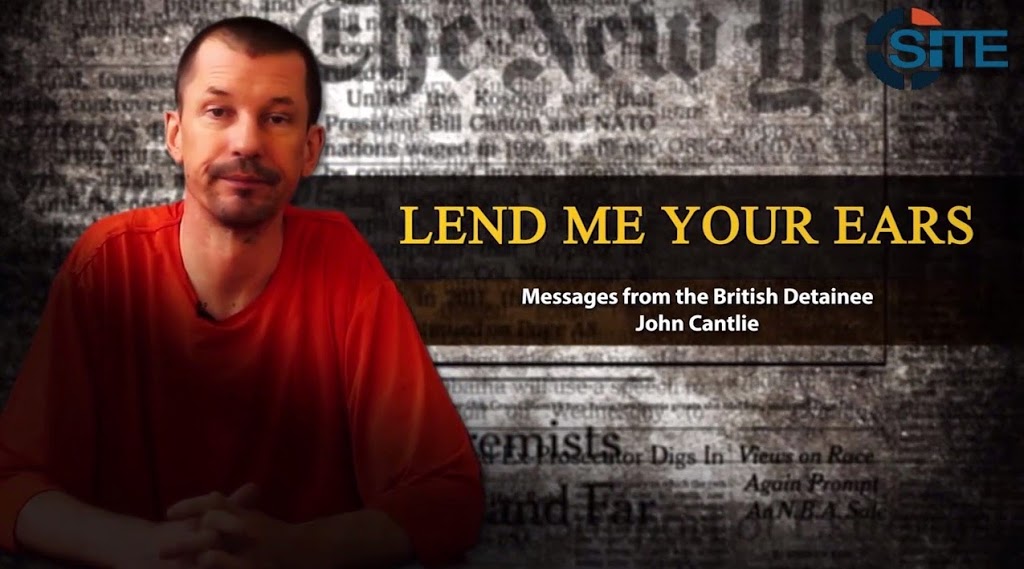 With the release of their third installment of the “Lend Me Your Ears” video series on October 12, 2014, featuring British captive John Cantlie, the Islamic State (IS) has underscored the adaptability and sophistication of their propaganda pipelines.

As Rita Katz observed in the aftermath of the video’s release, recent messages from IS leave little doubt that the group is cycling through strategies to try to forestall an American-led intervention in Iraq and Syria. Indeed, many of IS’s attempts to sway a Western audience can be viewed as the group’s attempts to do so by directly intimidating Western political leaders, or indirectly by convincing voters to pressure their elected representatives from supporting expansion of military conflict with IS.

Previous media outreach strategies from the Islamic State have employed tactics of intimidation, directed both at political leaders and at public opinion. Conversely, the four videos in the “Lend Me Your Ears” series, produced by IS’ al-Furqan Media Foundation and released online from September 18 through October 12, 2014 adopt a more subtle tactic, carefully framing the messages to be familiar to Western viewers. The series is not the first jihadi attempt to co-opt Western media styles and structures- notably, al-Qaeda’s media wing, as-Sahab has long been mimicking documentary video style.

However, a brief analysis of themes and messages featured in the videos reveals that al-Furqan Foundation’s attempts to reach out to mainstream Western audiences have continued to develop in cultural nuance, packaging the political messaging of IS through the words and conventions of a Western media insider.
The title, “Lend Me Your Ears,” is a notable signal in itself: jihadi media makes rich use of symbolism, and their productions frequently contain extensive reference to Islamic history and cultural tropes.

The Cantlie video employs the same strategy, but aims it at a Western audience for whom the phrase, “Lend Me Your Ears” is instantly recognizable as the first line in one of the most famous political speeches in the English-language cannon: Mark Anthony’s funeral oration in Shakespeare’s Julius Ceasar.

Not only is the Julius Ceasar reference applicable for a brief message designed to change the mind of a hostile audience, but the selection of a Shakespeare reference for the title likely attempts to make IS’s uncommitted Western audience more amenable to the IS’s position by subtlety implying that the two groups share a similar cultural backing. This reference also doubles as a subtle but goading gesture to Westerners who have already settled on a negative view of IS by reminding them of the presence of Western recruits within the ranks of the organization.

IS’s facade of legitimacy continues in the visual structure of the three brief videos. In the footage, Cantlie appears against a black background with his arms resting on what appears to be a wooden desk, and speaks to the camera in a candid tone. The structure has continued through the three official releases in the series, with each episode nearly six-minutes in length, approximately the length of a typical television news segment.

Even though Cantlie’s words are those of IS’s propaganda wing, by using a media-trained hostage, the Furqan Foundation is also able to tap into societal messaging that equates news media anchors with dependability and trustworthiness. The effect is heightened by the fact that IS can take advantage of Cantlie’s media training, using a Western journalist a context of the IS’s choosing.

Immediately after introducing himself in the first video, Cantile announced that through the course of the series, he would share the IS’s views on a number of issues, including hostage negotiation, foreign intervention in Iraq, and the group’s image in the Western media. In a common tactic of political messaging, Cantlie promised, “There is time to change this seemingly inevitable sequence of events, but only if you the public act now. Join me for the next few programs, and I think you may be surprised of what you learn.” Subsequent promotional material lists a total of seven episodes in the series, not including the introduction.

Notably, both the first and second videos forgo the militaristic, threatening messaging featured in other IS video productions, focusing instead on building an argument that the United States (and President Obama, specifically) are incapable of leading a successful military intervention. For example, in the second video, Cantlie remarks that the American intervention plan is ill-thought out, in no small part because “the Iraqi forces and Syrian militants expected to do the ground work are undisciplined and ill-suited to the task.”

The series uses terminology and metaphors that deftly target the tropes of Western media culture. For example, in the first “Lend Me Your Ears” episode, Cantlie dismissed the American preparations for military action against IS, presenting the preparations as “a circus” and arguing that American proposals to become involve in Iraq closely evoke the country’s involvement in Vietnam. Moreover, the video seized on President Obama’s ambiguous signals to claim that the Administration is so “confused” on the intervention that they are ‘tap dancing around the issue is a “we’re getting involved but we’re not really getting involved’ kind of way.”

The second episode, released a week later on September 29, used Cantlie to present IS’s response to Barack Obama’s September 10, 2014 speech focusing on the build-up to war against the IS. Using common Western media constructions, such as making reference to polls of American popular opinion, the video dismissed Obama’s 9/11 anniversary speech as “disappointingly predictable” and reduced the president’s statements to “America is good, the Islamic State is bad.”

The third video expands the derisive view to American allies, particularly the United Kingdom, chastising British Prime Minister David Cameron for allegedly failing to negotiate for the hostages. In a tone that is characteristic of the series, Cantlie enhances the overall framing of forthrightness—and thus the appearance that his message is trustworthy—by appearing to freely acknowledge his own interest in being released. Accusing Cameron of using the death of David Haines as a justification, Cantlie addressed Cameron, stating:

…You chose not to enter negotiations with the Islamic State that might have got us out, and now you want to use these deaths to fan the flames of this war. If that is the case then I deeply resent it, Prime Minister. Thanks a lot.
In conclusion, the four “Lend Me Your Ears” videos highlight a relatively subtle, but no less important avenue of message framing intended to keep a sophisticated Western audience from dismissing IS’s propaganda. By having a kidnapped Western journalist orate IS propaganda, the group is attempting to introduce their perspective into the mainstream Western media narrative. Furthermore, the knowledge of Western media culture demonstrated throughout the series reflects the degree to which IS has already been successful at obtaining Western recruits.The Islamic State is likely hoping that by presenting their views in a manner that is amenable to Western viewers, members of the Western media will watch the “Lend Me Your Ears” series and subsequently incorporate the group’s arguments into their own political commentary.