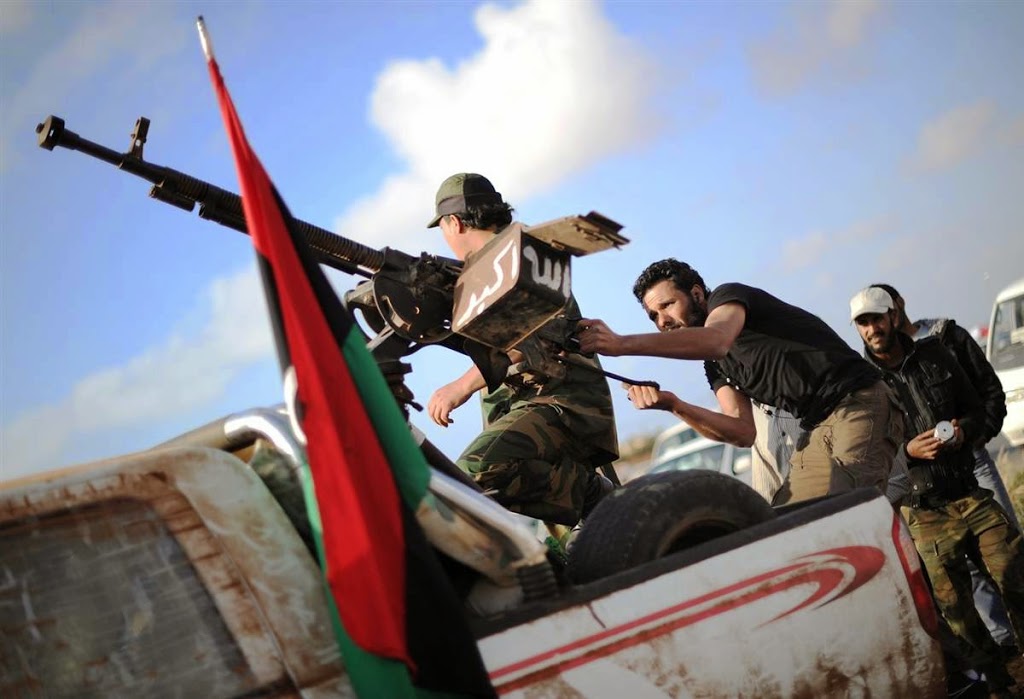 The overthrow of Libyan dictator Muammar Gaddafi in 2011 was heralded as a new beginning for Libya, a chance to start afresh and use its considerable oil wealth to build a modern, stable, democratic state.

As ever, reality has been more complicated, and the destruction of Gaddafi’s regime created instead a vacuum that has destabilized the country ever since, with Libya’s transitional governments unable to assert their authority over the country’s squabbling militias and factions, with deadly results.

Although the country continues to be rocked by violence, Libya successfully carried out elections for a new government in June, though powerful militias based in the west of the country refused to accept the result, expelling the new government from Tripoli and seizing the capital.

As Libya’s neighbors, both near and far, grow increasingly alarmed at the chaos, Asharq Al-Awsat spoke to Mohamed Al-Dairi, the foreign minister of Libya’s internationally recognized government, now sheltering in Tobruk after the fall of the capital, about the dire security situation in Libya, and attempts by the UN to mediate between its different warring factions.

Asharq Al-Awsat: You have held a number of meetings in Paris recently, not least your meeting with French Foreign Minister Laurent Fabius and US Secretary of State John Kerry. What assistance has Libya requested from France and the US?
Mohamed Al-Dairi: Our first demand is, naturally, [for them] to support the legitimacy of the government. In our view, this comes through finding a political solution and so via the provision of strong and vigorous support to the efforts of Bernadino Leon, head of the United Nations Support Mission in Libya (UNSMIL). The fact is that the UNSMIL-backed Libyan Dialogue in Ghadames which began on 29 September has given us hope that we can reach a political solution with those Libyans who are, first and foremost, our brothers, even though we disagree with them politically and they have unfortunately resorted to violence to express their political disagreement with us. The reality is that we are now following a political course which is seeking to overcome what happened after the parliament was elected on June 25 and after the results of these elections were announced on July 21. In the first place, the solution in Libya must be a political solution. Let me also say that there are other Arab and African states that suffered from the scourge of protracted wars, but at the end of the road, and after all of this violence and destruction, these wars ended with political solutions. We are seeking to put an end to the pains and suffering of the Libyan people.

Q: But what practical measures do you want the international community and the UN Security Council to take, particularly as the former government has requested assistance from them?
What we want from them primarily is to neutralize the opponents of the political process.

Q: Who are these opponents of the political process?
They know who they are, whether at home or abroad. We believe that Libya is the victim of a regional war following the radical changes that took place in the region, from Tunisia, to Egypt, to other states. The truth is that Libya has become the battleground for regional conflict and score-settling. In fact, Libya has become an arena where some parties are seeking to make new gains. I do not hide the fact that there are challenges to the political course. After Ghadames, statements were issued labeling even those that are participating in this process as traitors. Domestically, there are those who are continuing on the path of violence in order to make political and military gains. In our view, this is shortsighted because you could make a military gain today only to lose this in one week or ten days. The cycle of violence in Libya will not result in anything. After we freed ourselves from the clutches of dictatorship in 2011, we want to establish a state of laws and institutions and lead our country just like other transitioning Arab states, whether those in the Mashreq or the Maghreb. The issue is crystal clear for us: we want to establish a modern Libyan state together. However, we are facing great challenges [in achieving this].

Q: What is the political “road map” that has been drawn up by the Libyan government to help the country emerge from this crisis?
The road map supports the efforts of ambassador Bernadino Leon to reach an accord within the legitimate and elected parliament . . . and then return the government to Tripoli, its natural place, to exercise its functions from there as soon as possible.

Q: Where is the government exercising its functions today?
From the city of Al-Bayda, which is the current administrative capital, while Tobruk is the temporary seat of parliament.

Q: The former government called for international intervention in order to address the deteriorating situation in Libya. Is this request still on the table?
What happened today is that the international intervention is present via the mediation being carried out by ambassador Bernadino Leon. He talked about there being a political aspect (parliament and government) and a security aspect (a ceasefire) in order to stop this destruction and address the presence of militias in the country.

Q: Do you intend to disarm the militias in Libya?
We want to take the first steps [towards achieving this]. The UN envoy has mechanisms to achieve this and he is discussing them with the relevant committees at the UN. There are other countries that will assist him and back his efforts to disarm the militias, given the important political and geographic position that Libya occupies. But in the beginning, what we need to reach is a ceasefire and then to disarm and disband the militias. Bernadino Leon discussed all of these issues at the Ghadames meeting.

Q: A ceasefire would require for a monitoring force on the ground. Who would undertake this task?
I spoke with Bernadino Leon yesterday and he has yet to reach this stage in his discussions [with the UN] . . . But there is international support to achieve this plan. When we say “international support,” that is exactly what we mean. Both UN Secretary-General Ban Ki-moon and Bernadino Leon were welcomed in Tripoli when they visited last week, while we welcomed them in Tobruk as well. I want to say that such intervention is legitimate and is something the Libyan people, who want their country to emerge safely and move away from the cycle of violence, are calling for.

Q: A lot has been said recently about Egypt’s involvement in Libya. What does the Libyan government want from Cairo?
The issue is very complex, even within Egypt itself. I would like to begin by saying that the visit to Egypt [by Libyan Prime Minister Abdullah Al-Thani on October 7] took place following an official invitation from Egyptian President Abdel-Fattah El-Sisi, and that is important to note. Egypt is also a neighboring state and we share historic links with the country. What we requested from all states after July 13 [when Libyan militias seized Tripoli] is what we requested previously as the General National Congress and government, namely military cooperation with a group of states, including France, the US, the UK, Italy, Turkey, Egypt, the UAE, and Jordan. A team from the Libyan army visited these states to receive training and we hope that this continues. Everybody is aware that we are facing massive security challenges, while the Americans have yet to launch their military program with us due to difficult obstacles that remain in place. We also want to see the continuation of military cooperation, particularly as we now have a national army that is led by Gen. Abdul Razzaq Al-Nazoori, who has been appointed by the parliament. We have the nucleus for a Libyan army today. What is happening today in terms of cooperation with Arab and European states is a continuation of previous policies that were launched and adhered to by the former government. However, we are absolutely not asking for the intervention of the Egyptian or French armies [in Libya].

Q: What about requests to Egypt for security cooperation to protect your shared border?
We have requested this from all neighboring states, including Chad and Niger. This is something that began in 2012, and we want to secure all the borders that we share with neighboring countries. However, we also need to develop the Libyan army’s capabilities. We need to dispel all this confusion regarding alleged Libyan calls for international intervention.

Q: Egyptian security sources have informed Asharq Al-Awsat that Cairo is ready and willing to assist the Libyan government as much as possible, including providing political, security and military aid. What specific requests do you have for Egypt and other neighboring states?
What we are currently requesting from neighboring states is to adhere to the results of the Hamamat Conference that took place in July 2014, where Libya was represented by [former foreign minister] Mohamed Abdelaziz. The meeting resulted in Egypt heading the political aspect, while the security aspect was left for Algeria in its position as head of the security committee. We are seeking to implement the decisions of this conference and we would welcome Algeria providing us with this security and military assistance sooner rather than later. Algeria is a sisterly state, as is Tunisia, and their issues are Egypt’s issues. However, in the past, the training of the Libyan army took place in Jordan, the UAE, Egypt, France and Italy . . . and so there is continuity in this regard.

Q: What action has the European mission to assist Libya taken on the issue of border control?
It has provided technical assistance to develop the Libyan border control’s capabilities. Unfortunately, this mission is no longer present on Libyan territory. It left Libya like the majority of foreign embassies, which have now departed Tripoli.

Q: What is the most important step that must be taken to ensure that Libya is moving forward on the right path? General Haftar continues to besiege Benghazi, Zintani militias are seeking to gain control of Misratra, while conflict is ongoing in the capital Tripoli. What is the biggest threat? The political dispute may be improving but the domestic situation continues to deteriorate . . .
This is true; the situation on the ground is giving the opposite impression to the [political] reality. However, the path to the Ghadames meeting only began on September 29, 2013. Yesterday, I met with Bernadino Leon and I can honestly say that hopes are high regarding the success of this process. There are positive signs from both sides that attended Ghadames, and we must continue on this path in order to see the initial positive results of this. After the preliminary stage is over, Bernadino Leon will enter into the heart of the matter until we reach the preliminary results of this. We hope that this will take place within the next two months, securing the return of the government to Tripoli, because the natural thing is for the government to operate from the capital Tripoli, not Al-Bayda.

Q: Have you reached specific agreements with the French and Americans regarding the rebuilding of the Libyan army?
There are some things that were previously taking place, and we are continuing this. We want to activate the agreements that have been signed but have yet to see the light of day.

Q: Such as?
Training [of the Libyan army], as well as receiving arms that we requested previously. We did not come to Paris to request new things, but to activate agreements that were previously signed.

Q: Would you say that the countries that helped Libya overthrow Gaddafi have failed to complete their mission?
We had truly hoped for assistance during the transitional period, and they acknowledge that this has been insufficient. What happened in Iraq may have prompted these countries not to repeat the experience.