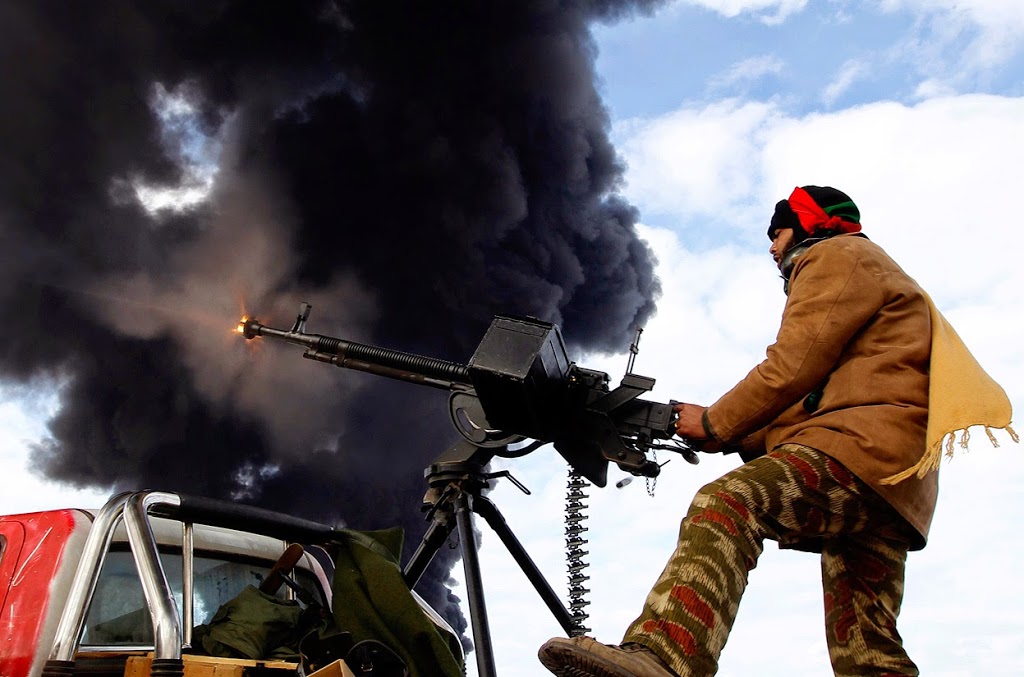 Only three years after the Libyan Revolution, Libyan citizens are wondering which parliament they should view as legitimate as only two entities claim the title. The first is the lawfully elected Libyan Parliament, elected by national suffrage in June of this year. The second parliament laying claim to legitimacy is the self-proclaimed “National Parliament.” The National Parliament is an Islamic-bent party constituted of remnants of the former Libyan National Parliament, which was dissolved upon the June elections. Notable in these elections was the poor faring of Islamist candidates.

To further complicate matters, the elected parliament had to flee the state capitol, Tripoli, in the late summer due to the escalation of violence between Islamist and sectarian militias. The parliament has since relocated to Tobruk in the northeastern region of Libya. Meanwhile, The National Parliament has claimed its headquarters in the capitol and has appointed a shadow Prime Minister, Omar al-Hassi, to provide an substitute for the legally appointed Prime Minister, Abdullah al-Thinni, whose office is currently located in Tobruk, as well.

During this past August, two alliances of militias battled intensely for control of Tripoli. On one side stood the Zintani Militia-led coalition, a self-proclaimed nationalist coalition that claims to resort to arms to protect Libya from the rise of militant, political Islam. On the other side of the court stood the Misrata Militia-led Libyan Dawn coalition. This coalition, although heavily Islamist, is also economically motivated. It has city-based militias, Islamic fundamentalist groups, as well as Berbers (a minority group in Libya) amongst its membership.

The prize of the one-month conflict, which was won by Libyan Dawn, was Mitiga Airport, the only functional airport in Tripoli due the destruction of Tripoli International Airport amid unending battles in the capitol. The airport had been held by the Zintani Militia since the overthrow of Qaddafi in 2011. From here, the ‘one million dollar question’ presents itself: Why is the control of the airport so important to these entities that are vying for power? The ‘one million dollar answer’ is simple: He who controls Tripoli’s airport, controls the distribution of much aid, oil, food, and water to other cities throughout Libya. Hand-in-hand with the Libyan Dawn takeover of Tripoli, the National Parliament has surged back into the spotlight in Tripoli, as mentioned above.

Curiously, since Libyan Dawn has seized control of Tripoli, Libyan oil exports have surged. While the daily oil exports amounted to a meager 160,000 barrels through July 2014, they have surged to 900,000 barrels a day at present. If a certain group is controlling the majority of the revenues generated from these exports, it will most certainly have deep coffers for arms procurement and recruitment.

Egypt and the United Arab Emirates (UAE) are extremely concerned about the recent developments in Libya—not only of the rise of Islamist militias across the country, but also of the Muslim Brotherhood’s role within Libya. In late August, the two nations launched joint air strikes on Libyan Dawn targets in Tripoli that were fighting the Zintani Militia. These strikes were not coordinated with the Western powers and allegedly irked the U.S. administration. Egypt and the UAE simply responded by communicating that the situation in Libya—most specifically the rise of militant, political Islam—is being dangerously ignored by the West. Despite their intervention, Egypt and the UAE were unsuccessful in preventing the Zintani Militia from being driven from Tripoli.

Egypt and the UAE have also supported Libyan General Khalifa Haftar’s forces in Benghazi against the Islamist coalition led by Ansar al-Sharia. Haftar and his supporters, however, were driven out of the city in late-August by the Islamist militias. The Ansar al-Sharia led coalition presently controls Benghazi and also seized a large portion of Haftar’s weapons, ammunition and vehicles.

At the other end of the proxy war spectrum lie Qatar, Sudan and Turkey. Qatar has been accused by members of the current elected Libyan parliament of supporting the Islamic militant groups in the country. Qatar, although rather inexperienced in foreign affairs and in steering international conflicts, is flush in cash from its oil and natural gas revenues and allegedly opening up its coffers to assist Islamist groups in the region, including militant ones. Saudi Arabia, Egypt and the UAE have all voiced their concern with Qatar’s support to terrorist and militant Islamic entities in both Syria and Libya. Ahmad al-Hirati, the Mayor of Tripoli, has recently accused Qatar, as well as Turkey and Sudan, of financially and logistically supporting militant Islamists from Yemen to enter Libya from Sudan. These militants, consequently, have joined the Libyan Dawn coalition and assisted them in tilting the scales in their favor.

Tunisian diplomat Mohammed Bel-Sheikh, kidnapped in Libya, pleading for release negotiations.Other disconcerting events have also occurred in the past year and half, but have gone relatively unnoticed in the Western media. On August 29th, Yussuf Ali al-Seiffar, the lead military prosecutor for terrorist crimes in Libya, was assassinated by a car bomb. In August 2013, the vehicle of Nataliya Apostolova, the European Union Ambassador to Libya, was attacked in Tripoli. In April 2013, the French Embassy in Tripoli was bombed. One must also remember that U.S. Ambassador Christopher Stevens was killed by Ansar al-Sharia-affiliated elements in Benghazi on the anniversary of September 11th in 2012 (although this did generate a great deal of media coverage). There have been scores of assassinations in Benghazi over the last several months, including political candidates, government officials, and journalists. These targets have included Islamists, as well as secular figures.

Expanding our Focus and Priorities
In light of all of these events, and the disparate, fractionalized state of Libya, the West must pay heed and ensure that it does not ignore a dangerous and downward-spiraling situation. With all the media focus on the Islamic State’s (IS) inroads in Syria and Iraq, this can easily occur. Libya has a glut of arms circulating in its territory due to the ransacking of the Qaddafi arsenal after his downfall in 2011. The chaotic state of Libya makes it impossible to pinpoint which groups have arms and exactly what arms they possess (there were obviously no chain of custody forms signed, nor were inventories established upon Qaddafi’s demise). Add the regional conflicts that surround Libya, and the terrorist groups attached to them, and you have a recipe for serious concern.

The close proximity of regional Islamic terrorist conflicts to one another is a cause for great concern for the West. Within the North African and Middle Eastern regions, there are ongoing Islamic terrorist conflicts in Mali, Algeria, Libya, northern Egypt, Yemen and Syria/Iraq. The balloon effect comes into play with each concerted effort against the terrorist and insurgent organizations in these countries as terrorist soldiers slip away like water to join other nearby, kindred conflicts. Just look at the example of the robust Saudi Arabian response to al-Qaeda in the Arabian Peninsula (AQAP) from 2006-2008 and the resulting export of the group to Yemen, where it is currently domiciled and very active.

Benghazi anti-Qadafi protest in July, 2011.The West would do well to also reflect on its interventions and foreign policy in the region, as it presently assesses the dire situations in Iraq and Libya. First, it must realize that democracy is a very difficult concept to introduce to countries that have been ruled by the sword for generations. Second, “Zeitgeist” does not always possess permanence, such as the regional clamor for democracy during the Arab Spring in 2011 and the short-lived democratic experience that ensued.

There are always vested interests and groups looking to seize the political and economic opportunities that present themselves in times of political turmoil. As the perennial argument between the utopians and the realists plays itself out in the region, it seems that the realists have the current bragging rights. Lastly, if a policy of intervention and support for the change or overthrow of regimes in North Africa or the Middle East is to be pursued, the West must ensure that it understands the risks involved and that is has a long term plan in place for the new paradigms. These risks can include the creation of vacuums, anarchy or the rise of a regime that is less desirable than its predecessor.

There must exist a long-term plan for interventions such as the one in Libya. The military intervention of NATO, the toppling of Qaddafi, and the delivery of a book entitled, “Enjoy Democracy,” is probably not going to bring long-term stability to the region; it is simply too volatile to endure an additional vacuum such as the one that is unfolding in Libya. From a Western foreign policy standpoint, there may now exist too many regional hotspots for the West to effectively contain. Military interventions such as those in Iraq, Afghanistan, Libya, Mali and now Syria cost millions of dollars. And in times of tighter purses, the West’s ability to continue to engage in multiple conflicts of this nature has become more limited.

Similar to the situation in Syria, as Libya fragments further into splintered warfare amongst a plethora of militias, the West may not have a viable option for intervention to effectively stem the darker specters of the Islamic terrorist groups. To counter the rise of such insurgent groups, there must be a viable counterforce to which to lend financial support, arms and training. There must also be stable locations to deliver these items to. In Libya, as in Syria, the West does not have a viable force to side with to counter the rise of the more heinous terrorist groups.

Furthermore, the West, most specifically the United States, is not willing to use its own ground troops in a new conflict. This “catch-22” does not portend good times to come for the Libyan citizenry, nor for their immediate neighbors. The first thing that the United States and its allies must do, however, is to place significant diplomatic pressure and leverage on Qatar, Turkey, and Sudan in order to dampen the money, foreign fighters, and weapons that are flowing into to Libya in support of terrorist organizations and other militant Islamic groups.

These flows are accelerating Libya’s path towards anarchy, or something even worse. The West cannot forget about this country just because the big man is gone.