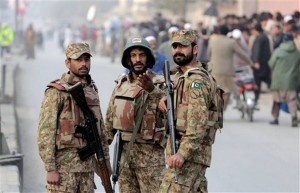 Nine paramilitary soldiers were killed in predawn attacks in a restive tribal region of northwestern Pakistan on Thursday, an official said.

In one of the assaults in Mohmand Agency, seven Khasadar Force personnel were killed in gunfire at their check-post in Karapa area of Pandyalai sub-district.

After killing the security personnel at the checkpoint near the Afghanistan border, the militants managed to flee, Assistant Political Agent Naveed Akbar said.

Two more paramilitary soldiers were gunned down by suspected militants in the Mechani area of Mohmand Agency. The victims were guarding a solar tube-well in the area.