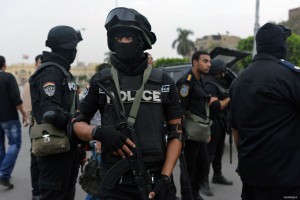 The nine Brotherhood members, the source said, “were killed in a shootout with security forces during a raid on a house in the town of Aussem”.

According to the source, a cache of weapons and explosives were seized during the raid.

The Muslim Brotherhood, for its part, has yet to issue a statement on the source’s assertions, while the Egyptian authorities have yet to confirm the report.

Last week, the London-based Human Rights Monitor noted that 79 civilians had been killed in Egypt last month in extrajudicial killings.

Egypt has been dogged by turmoil since the military ousted Mohamed Morsi, the country’s first freely elected president and a Brotherhood leader, in mid-2013.

Since Morsi’s ouster, the security forces have waged a harsh crackdown on his supporters and members of his now-outlawed Muslim Brotherhood, killing hundreds and detaining thousands.