You are here: Home / Senza categoria / Libya’s rival factions are fighting to establish facts on the ground for future negotiations 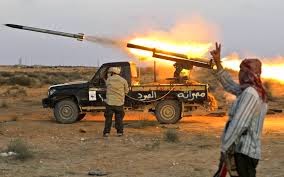 Most countries recognise the Tobruk-based House of Representatives (HoR) as Libya’s legitimate legislature, yet the HoR is haemorrhaging support. It is becoming increasingly marginalised as it hunkers down in its safe house a thousand miles from the capital while domestic support shifts towards Operation Dawn, a Misrata alliance that controls Tripoli and has been able to administer it semi-competently.

This dynamic is reflected in the international community’s change of strategy regarding peace talks. While the Madrid conference invited only Tobruk-based HoR representatives, the follow-up Ghadames talks expanded to include boycotting HoR members who support Dawn.

Recently, the UN has pledged that the next round of discussions will include Libya’s powerful militia leaders. Although all parties are guilty of adopting polarising discourses and uncompromising positions, the majority on both sides now recognise the potential importance of these mediation efforts.

Consequently, recent developments in Libya can be understood as attempts by rival factions to establish facts on the ground which can later be bartered away for a stronger position in a future negotiated settlement. Only the very few factions which will not be invited to the talks, such as Ansar Sharia or the rogue Misratan commander Salah Badi, aim to act as spoilers and derail the whole process.

Strengthening positions
None of Libya’s factions are strong enough to rule the whole country and it seems unlikely that any are deluded enough to think they can score a knockout blow, even if buttressed by outside help.

The HoR and Abdullah al-Thinni’s government are aligned with Libya’s anti-Islamist camp, spearheaded by General Khalifa Haftar who is leading Operation Dignity, a campaign against Islamist militias centred on Benghazi.

On October 15, Haftar renewed his offensive in Benghazi  while Zintani forces in the west attempted to retake Kikla from Operation Dawn.

In recent months, both the Zintanis and Haftar’s forces have been overpowered by their Dawn opponents and this coordinated anti-Islamist offensive does not mean they suddenly believe they can beat the Islamists militarily, despite Haftar’s rhetoric.

Rather, it is a move to strengthen their position before entering peace talks or before Haftar steps down leaving the way for more institutional actors. Indeed, during the offensive the Libyan Army announced it had adopted Haftar’s Operation Dignity campaign as its own, allowing the Tobruk administration to take credit for any military advances by Haftar’s campaign, while also making clear that the body is no more legitimate than its overtly militia-aligned adversary – Operation Dawn.

In the capital, Islamist-aligned members of the former parliament, the General National Congress (GNC), and Omar al-Hassi’s National Salvation government are backed by Dawn militias. While this camp undoubtedly has the military advantage, they need greater  political legitimacy to strengthen their hand, if and when, they take part in peace talks. They will not wrest international recognition away from the HoR by brute force and institutional guile alone, but by administering Tripoli coherently they may succeed in becoming legitimate participants on an almost equal footing with the HoR when negotiations begin.

Scramble for oil money
This battle for legitimacy and power is being played out within Libya’s two most influential institutions: the Central Bank and the National Oil Corporation (NOC). The HoR voted in September to dismiss Sadiq al-Kabir from his position as Central Bank governor, however Kabir appears to still be running the bank. Through him, the Islamist-aligned government has at least some control over Libya’s finances.
Last week, the Central Bank transferred Hassi’s government enough funds to cover three months of family allowance payments, while a GNC-controlled public spending authority has managed to impose a payment limit of 200,000 Libyan Dinar across the public sector.

Meanwhile, Hassi’s Oil Minister Mashallah al-Zwey has physically taken over the NOC headquarters in Tripoli along with the NOC website. As such, officials are reportedly taking direction from him. Indeed, the official Libyan government website has been taken over by Hassi’s National Salvation government. Those cyberspace realities go a long way to validating the Tripoli government’s claim to sovereignty and legitimacy.

Recent military moves reveal that neither side can win the battles they are fighting in Libya, but both can glean political advantage from military manoeuvres if they are able to parlay them into a successful strategy at the negotiating table.