You are here: Home / Senza categoria / US Airdrops Arms, Ammunition to Kurds Battling IS in Kobane 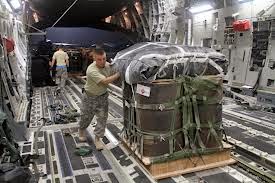 The American military airdropped weapons, ammunition and medical supplies to Kurds fighting the Islamic State group in the flashpoint Syrian city of Kobane, in a move likely to anger ally Turkey.

Kurdish defenders have been under IS assault for more than a month in Kobane, which has become a key prize and is being fought under the gaze of the world media massed just across the border in Turkey.

Three C-130 cargo aircraft carried out what US Central Command (CENTCOM) called “multiple” successful airdrops of supplies in the vicinity of Kobane yesterday, including small-arms weapons, provided by Kurdish authorities in Iraq.

It is the first time the US has made airdrops to Kurdish fighters in Kobane.

The aircraft faced no resistance from the air or the ground, were not accompanied by fighter jets and exited the area safely, a senior Obama administration official said, refusing to rule out a repeat of the action if needed, possibly in the near future.

The supplies were “intended to enable continued resistance against ISIL’s attempts to overtake Kobane,” CENTCOM said in a statement, using an alternative acronym for Islamic State fighters who have overrun large areas of Iraq and Syria in a brutal campaign.

One senior Obama administration official said Kurdish fighters had put up an “impressive” effort in the face of the emboldened IS organization, but cautioned that Kobane could still fall to the IS and the security situation was “fluid.”

Nevertheless, “hundreds” of IS fighters had been killed in the escalating campaign in Kobane.

Washington and its Western allies have been pressing Turkey to take a more direct role in taking on the IS group in Kobane, but Ankara is reluctant to arm Kurds and intervene militarily against the militants, fearing an effective fighting force from its historic foes on its border.

On the prickly subject of whether the Turkish government has been informed beforehand of the resupply drop, a senior administration official in Washington said President Barack Obama spoke to his counterpart Recep Tayyip Erdogan yesterday “and was able to notify him of our intent to do this and importance we put on it”.

The official added: “We understand the longstanding Turkish concern with the range of groups, including Kurdish groups, they have been engaged in conflict with and in peace talks with.”

However, the official said, Islamic State was “a common enemy” for the United States and Turkey.