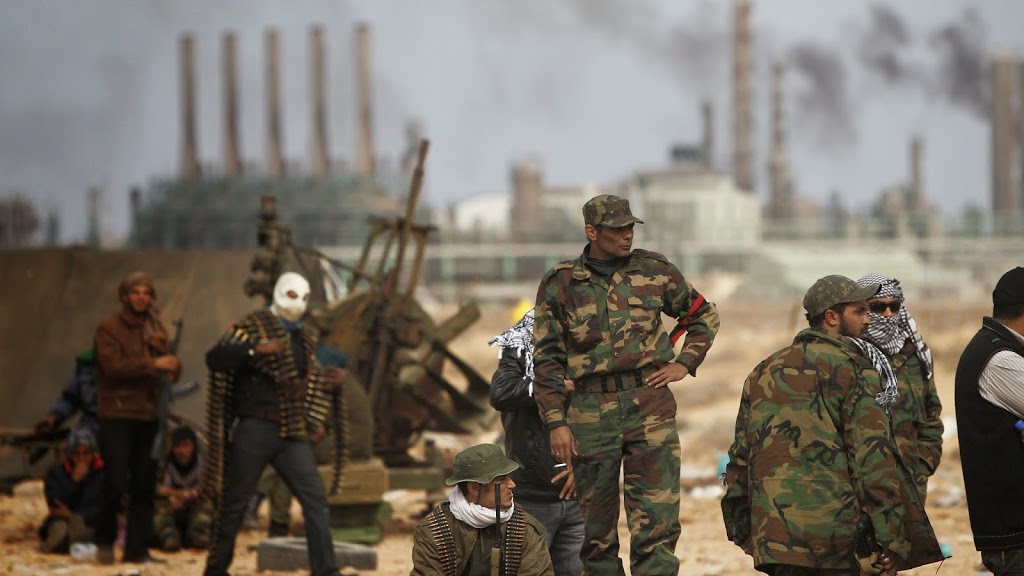 Egypt has warned that militant groups are poised to seize control of Libya’s oilfields, as the country’s foreign minister appealed for an expansion of the Western-led campaign against Daesh to tackle extremism threatening North Africa.

Sameh Shukri, the Egyptian foreign minister, used a visit to London on Monday to push for a new approach from Britain and the West to Islamist violence in Egypt and its neighbours, modelled on the campaign targeting the Daesh.
“The natural resources in Libya represents a very large pool of wealth and funding that will fund terrorist activity not only there but in other parts of the world,” he told The Daily Telegraph.
“You see [Daesh] in Iraq utilising petrol and the black market and in Libya this is a danger that will have a big impact for us.”
Six months after the Egyptian leader, Abdul Fattah Al Sissi, was elected president following the removal of the Muslim Brotherhood’s Mohammad Mursi, Shukri said the organisation was behind violence similar to Daesh in Egypt, Libya and elsewhere in North Africa.
Egypt has supported the Libyan government against Islamist militias that now control most of the country’s big cities and large swathes of territory, though not yet the oilfields.
“We have a struggle against similar organisations that are an offshoot of other terrorist ideologies like the [Muslim] Brotherhood and all these organisations support each other. We have seen terrorists from Daesh move from Iraq and Syria to Sinai, even Nigeria. The interconnected nature of all these organisations has to be recognised.”
Given the shared ideological roots of the Muslim Brotherhood and violent Islamist movements, Shukri said the fight could not be won in Iraq and Syria alone.
“All of us attempting the eradication of a terrorist organisation in one area will need to have greater cooperation in another if we are to comprehensively deal with this threat,” he said.
Egypt has welcomed Downing Street’s decision to commission a report into the scope of Muslim Brotherhood activities both in the UK and around the world, as the post-revolutionary government seeks the isolation of its strongest rival.
Although the document will not be published until the end of the year, leaks have indicated that Britain will take action against Muslim Brotherhood-linked groups where there are suspicions of financing or involvement with suspicious activities abroad.
Al Sissi has declared the Muslim Brotherhood to be a terrorist group, although it has said it is peaceful and rejected links to the attacks. Shukri said Britain should aim at the group’s finances, organisational structures and “ability to continue to promote violence extremism”.
He pressed Philip Hammond, the Foreign Secretary, to increase cooperation over “common security threats” over lunch at Carlton House Terrace yesterday and later met with cross-party groups in the House of Commons.
After 33 members of the security forces were killed last week by attacks on the Sinai Peninsula blamed on the Ansar Beit Al Maqdis group, Hammond promised to intensify cooperation with the Cairo government.