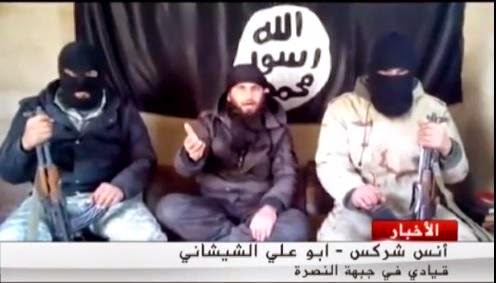 ISIS and al Qaeda may be fighting each other, as well as the Syrian regime, in Syria, but just across the border in Lebanon they are collaborating for a common cause.
The two terrorist organizations broke ties in Syria and began fighting each other last year, when al Qaeda dissociated itself from the Islamic State group. But they share Sunni Islam, and that has helped push them into a relationship that, while not a formal alliance, is a joining of forces in the face of a common enemy, the Shiite Hezbollah.
The de facto truce in Lebanon’s mountainous border region around Qalamoun has been in effect since the summer between the Islamic State group, or ISIS, and al Qaeda’s Syrian branch, Jabhat al-Nusra, or JAN, which commands a much bigger following in Lebanon.
Their alignment, however, may be short-lived, as ISIS prepares to take more land.
“ISIS and JAN may combine their efforts in Qalamoun and Lebanon, a break from their strategic norms,” according to a study from the Institute for the Study of War. “This alignment may dissipate quickly, however, if ISIS uses Qalamoun as a launch point to co-opt gains made by JAN and rebels and expand ISIS’ control.”
When ISIS declared its so-called caliphate in June, it also announced it would expand across the region into several other countries, including Lebanon. Since then, the group had made no official statements about Lebanon, until earlier this week, when a report circulated that ISIS was preparing to declare an “emirate” there. But an actual “Islamic State of Lebanon” is unlikely to happen anytime soon, experts said, without ISIS first gaining the allegiance of Jabhat al-Nusra and other, smaller Sunni brigades affiliated with al Qaeda.
Since January there has been an uptick in jihadi “movements on the border in the Qalamoun area, with a possible offensive to be made soon against Hezbollah points,” said Joseph Bahout, a visiting scholar in Carnegie’s Middle East Program who focuses on Lebanon and Syria. “We have information that concentrations are increasing on the border.”
Lebanon has long been a host country for jihadist groups operating in Syria, thanks to a border vulnerable to infiltration. Lebanon’s Iran-backed Hezbollah got involved in the Syrian civil war in 2013, supporting the regime of president Bashar Assad, whose Alawite branch of Islam is an offshoot of Shiism. In the early stages of the war, Qalamoun and Arsal were also hotspots for Free Syrian Army soldiers fighting the regime. But soon, Jabhat al-Nusra emerged  as the dominant Sunni group in the area.
It also has a strong ally in Lebanon whose existence predates the Syrian civil war: the Abdallah Azzam Brigade, which claimed responsibility for many of the recent terror attacks in the country and has declared its loyalty to al Qaeda.
ISIS could not infiltrate Lebanon without their help. “Lebanese jihadi reality is much more close to Nusra than to ISIS,” Bahout said.
Still, last month there were more than a thousand ISIS fighters in the country and nearly 700 of those were new allegiances, Major General Abbas Ibrahim, head of Lebanon’s Directorate of General Security (DGS) told Reuters. The group has been drawing new recruits from Lebanon’s marginalized Sunni population, from fighters returning from Syria and even some smaller former Free Syrian Army brigades in Syria’s Homs province, according to Now Lebanon.
In some ISIS-heavy areas, the militant group has even begun paying salaries to fighters, according to Radwan Mortada, a reporter for Lebanese newspaper al-Akhbar. There have also been multiple reports of attacks on Hezbollah and Lebanese Army checkpoints, and violence against civilians who do not follow ISIS’ strict laws.
There has been an “overall increase in ISIS’ activity in Qalamoun, where ISIS has maintained a small presence for years,” according to the ISW report. “Reports in February 2015 of an ISIS Shariah court and checkpoints in the surrounding countryside indicate that ISIS intends to establish political control.”
So far, it has not succeeded.
In December, ISIS caliph Abu Bakr al-Baghdadi reportedly sent a three-person delegation including the group’s “emir,” or leader, in Lebanon — thought to be Sheik Abu Abdulah al-Maqdisi — to  demand allegiance from JAN “emir” Abu Malek al-Talli. Al-Talli refused, according to Radwan Mortada, a reporter for Lebanese newspaper al-Akhbar.
However, even if ISIS succeeds in eliminating Jabhat al-Nusra in Lebanon by forcing members to pledge allegiance to al-Baghdadi, it would still face a powerful, well-organized fighting force: Hezbollah.
Hezbollah, which the U.S. calls a terrorist organization, is now working with the Lebanese Armed Forces to push back Sunni jihadi militants. Last year it even began arming different religious sects around the country, trying to rally support from groups that used to be opposers, International Business Times reported.
The international community is also sending aid to the Lebanese Army. Earlier this week, the U.S agreed to provide military aid, including six Super Cobra attack helicopters; on Tuesday, Jordan reportedly gave Lebanon a “military gift” of “armored personnel and artillery carriers.”
For now, the threat those weapons are meant to counter — ISIS — isn’t a military menace. “I would still say that Nusra is much more present in the Lebanese landscape than ISIS,” Bahout said. “Is it changing? Yes probably, with time.
But I’m not sure that ISIS is in [any] capacity today to really seize parts of Lebanon and proclaim something sustainable.” But the stage may soon be set for a conflict between ISIS and other jihadi factions: “[They] are anticipating that moment,” Bahouit said, “and preparing for what could be a decisive battle on the border.”