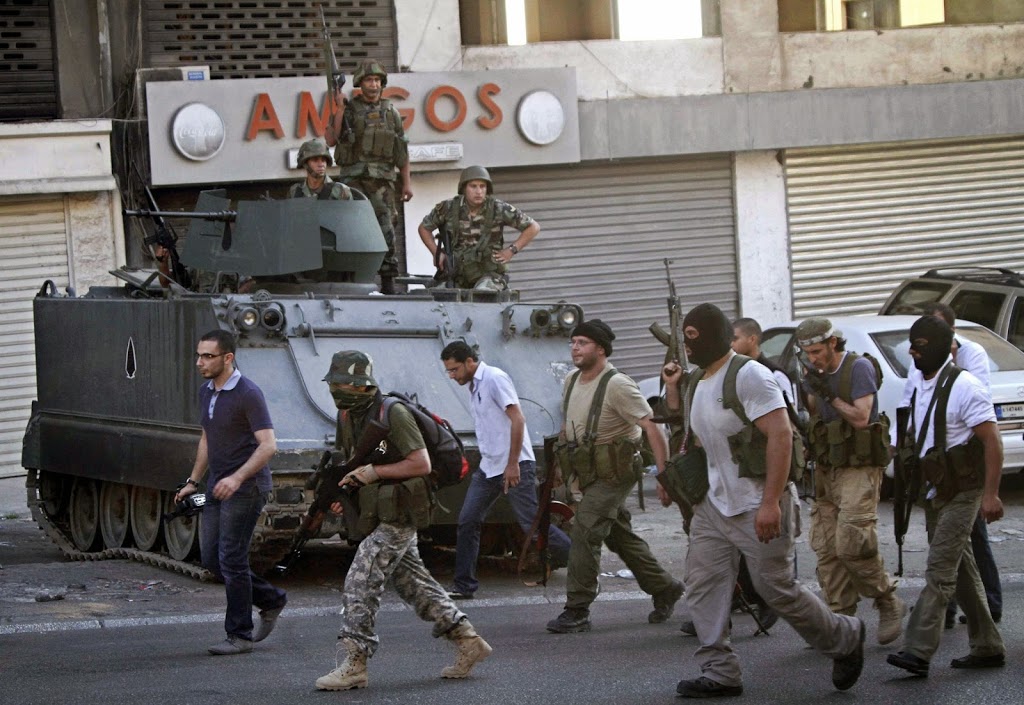 As Tripoli, Lebanon’s second city, picks up the pieces following four consecutive days of clashes between ISIL-linked armed groups and the Lebanese army, experts and local figures question the reasons behind the army’s unprecedented use of heavy force this time round.

“The Lebanese army is changing its approach towards armed groups in the north. It is [the army] coming in hot and hard on these groups,” said Aram Nerguizian, a senior researcher at the Center for Strategic and International Studies, in Washington DC. “The LAF is no longer willing to absorb punches,” Nerguizian told Al Jazeera.

The recent round of fighting marked the worst spillover of Syria’s war into the country since the Islamic State of Iraq and the Levant (ISIL) and al-Nusra Front fighters clashed in Arsal, on the Syrian border, in August.

The bout of violence, the deadliest since the outbreak of civil war in Syria in 2011, broke out on October 23, after an army patrol was attacked in the market area. The Lebanese army carried out raids in the city searching homes of individuals with alleged links to ISIL.

According to an army statement, 162 armed suspects had been arrested since clashes broke out on Friday and at least 42 people, including 11 soldiers, were killed in the fighting with some 150 wounded.

Tripoli was calm on Wednesday October 29, as civilians returned to their homes after the army, backed by helicopter gunships, took over the fighters’ strongholds including that of Shadi Mawlawi and Osama Mansour. Mawlawi and Mansour are reportedly linked to al-Nusra Front and have been leading the fight against the army.

During the recent battles, the army appeared to have overpowered the ISIL-linked fighters. This, says Nerguizian, was due to having learnt the lessons of the Abra clashes, which took place in June 2013 between the army and supporters of a Salafist sheikh in Saidon, south Lebanon, and in Arsal in August.
However, it remains to be seen whether the army-led counterattack  would set a new pattern for future altercations with the armed groups in the city.

“That depends on what happens on a broader regional level,” Nerguizian added.

The US-led coalition against ISIL has put pressure on the regional players who fund armed groups in Lebanon, to end their cash flow, he explained.

Moreover, the army’s exceptional use of force this time round was publicly supported by the country’s political establishment including mainstream Sunni politicians, such as Future Movement leader Saad Hariri.

“At the top level, they have enough backing to take on Tripoli’s armed groups,” he said.
The arrest of Tripoli-based MP Khaled Daher’s guard was a case in point.

An outspoken critic of Hezbollah, the MP was accused of being associated with Ahmed Salim Mikati, whom the army accuses of recruiting young Lebanese men to join ISIL.

Mikati’s detention was believed to have triggered the recent wave of clashes on Friday. The fighters were calling for his immediate release.

On Saturday October 25, Daher condemned the arrest of his bodyguards.
Daher’s alleged connection to Mikati, Nerguizian explained, proved that “some Future Movement MPs will not toe the party line and will keep pandering to a much more militant line, one that Hariri himself cannot sustain”.

The clashes came in the context of stalled negotiations to free at least 27 Lebanese servicemen, captured in Arsal by ISIL and al-Nusra Front fighters in August.

According to sources who are in direct contact with the fighters, negotiations have so far failed to pick up speed because al-Nusra fighters have called for the release of Islamist prisoners in Roumyiah prison, as a key condition for the release of the abducted soldiers. This, however, has proved to be a thorny subject for the government.

But Sunni discontent has been on the rise even before the Arsal clashes. “Sectarian tensions, linked to the Syrian uprising, have been on the rise since Hezbollah sent its fighters to battle alongside the troops of the Syrian regime,” said Abdullah Zakaria, the head of the union of municipalities in Akkar.
“The sympathy Sunnis feel for their Syrian brethren is compounded by the inequalities they have at home,” he said.

“Many feel they are being unfairly targeted by the army for supporting the [Syrian] revolution, whereas Hezbollah can send its men to fight openly.”

“A marginalised few within the Sunni community perceive the army as a tool in the hands of Hezbollah,” explained Sheikh Abdel Rahman Akkari, who resides in Minyeh and is acquainted with Mawlawi.
“The men who attacked the army did so because it implemented a harsh security plan [last March] and was monitoring them.”

Additionally, years of underdevelopment have left young men with no jobs amid dire economic conditions which served as a vehicle for recruiting fighters.

“Shadi is a simple man,” Akkari said of the fugitive commander. Mawlawi had a small number of followers in the north after his arrest in May 2012 on charges of terrorism. He was subsequently released on bail. “But just a few Sunnis in the north sympathise with him.”

The same goes for Sheikh Khaled Hablas, another controversial figure who notoriously issued an edict calling on Sunnis to defect from the army.

“I’ve been in contact with him,” Akkari said. “He started calling for a Sunni revolution after MPs failed to address complaints that men in Tripoli were being treated badly at army checkpoints.”

Both experts and local religious figures downplayed the possibility of mass Sunni defections from the army as a result of the recent confrontation.

Last week three soldiers from north Lebanon, defected to fight with armed groups, including Abed-Elkader Akoumi who joined ISIL as well as Mohammed Antar and Abdallah Shehadeh, who joined the al-Nusra Front.

“When three desert from a total combat unit of 22,900 fighters [the number of Sunni soldiers in the army], it’s not a sign of a threat,” said Nerguizian.

“But the fact that those who defected came from communities that are hard-hit by unemployment and unequal distribution of aid since 1990, points to the kind of investment that should be made in the north by the government.”