You are here: Home / Senza categoria / Is Syrian army heading for victory in Aleppo? 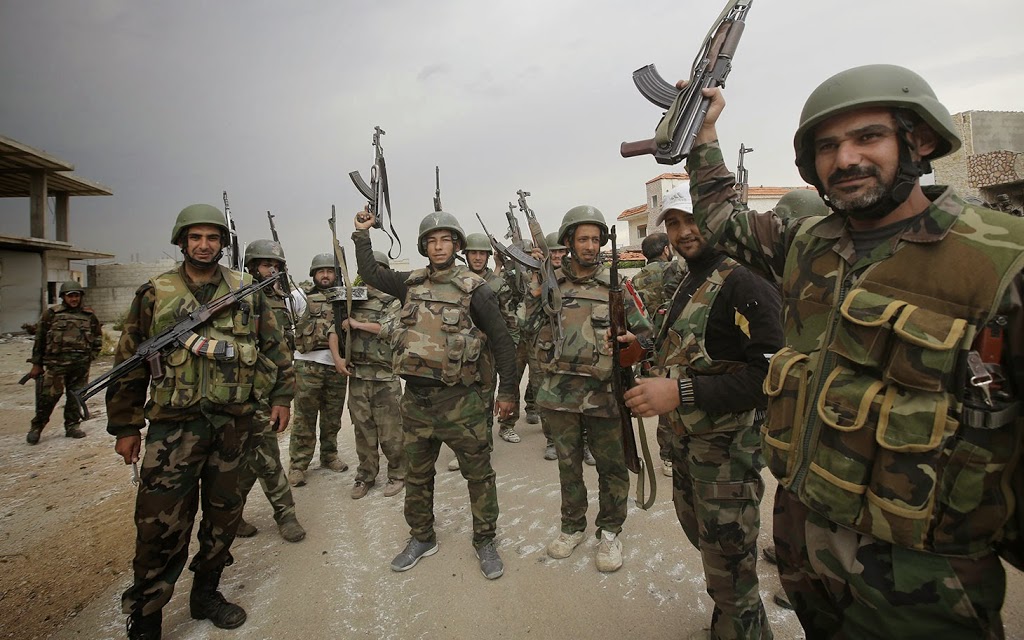 Violent battles erupted between opposition forces — namely the Hazm Movement and Jabhat al-Nusra — and the Syrian army, before the latter on Oct. 23 took control over the strategic town of Murak in Hama’s northern countryside, where the flags of the opposition were taken down and Syria’s flag with the two green stars rose in the town’s main square.

The government forces’ control over Murak, 30 kilometers (19 miles) north of Hama, is part of Syrian President Bashar al-Assad’s strategy to slowly advance within geographically overlapping regions. It is an expansion of previous victories, accomplished after the recent advance in Aleppo’s countryside and control over Halfaya, a town 25 kilometers (15.5 miles) northwest of Hama. This opens the door for new clashes with opposition fighters in the north, especially since the countryside outside the cities represents one continuous line in the battles.

The relative calm experienced in Hama does not indicate that its countryside is witnessing possibly crucial battles. Upon leaving the city, one sees Syrian army tanks spread on both sides of the international highway, welcoming people with a calm demeanor. However, upon reaching Qamhana, one sees land and towns covered in black smoke and hears the sounds of clashes.

When Al-Monitor arrived in Murak, calm had prevailed over most of the area, with the exception of a few neighborhoods experiencing combing operations in anticipation of ambushes or traps left behind by the opposition fighters.

A member of the National Defense Forces participating in the battle told Al-Monitor on condition of anonymity, “The forces centralized in the south of the city are advancing, while the shelling and combing operations, using machine guns and heavy weapons, on both the western and northern sides of the city are increasing. All this led to the collapse of the defense [strategy] of the gunmen trapped inside Murak. Our control over the hill of the tank battalion on Oct. 18 in the northeast of the town allowed us to siege it and detect the supply lines there.”

Ahmad Fadel, a journalist accompanying the Syrian opposition forces, confirmed that the fighters withdrew from the town due to heavy artillery shelling and airstrikes by government forces. “The heavy shelling forced the fighters to withdraw from the town toward northern areas, particularly toward al-Kassara checkpoint, Atshan village in the east and the town of Khan Shaykhoun in the north,” he told Al-Monitor.

“The town was invaded from three sides, after shelling by military aircraft and helicopters that lasted 10 hours with over 90 airstrikes using barrel bombs and thermobaric weapons. Subsequently, the fighters were forced to withdraw two nights ago,” Fadel said.

Opposition forces took over Murak in late June, which then allowed them to cut off supplies to government troops. The supply line ran from the areas the government controlled in the province of Hama to the military camps of Hamadiya and Wadi al-Dayf, east of the province of Idlib, which were completely besieged by opposition forces after they were able to control Murak.

The town’s importance derives from its strategic location as a node connecting the opposition’s supply lines, starting from Hama’s countryside and down to the areas it controls along the Syrian coast. In this context, Thaer Dayoub, a journalist specialized in military affairs, told Al-Monitor, “By controlling Murak, vast areas the fighters in Idlib’s countryside had sway became accessible to the Syrian army.”

Dayoub said the Syrian army is expected to advance after its accomplishments in Hama’s western and northern countryside, as well as following the impact it had on imposing a military siege around Aleppo and Idlib. “Murak’s military fall indicates the complete securing of military supply lines to the north, which weakens the danger to the troops in Aleppo and positively affects the course of the battles in both the city and its countryside,” he added.

According to a retired officer from the Syrian army in Damascus, who spoke to Al-Monitor on condition of anonymity, the Syrian army was alerted after the opposition and Jabhat al-Nusra fighters came close to reaching Hama’s military airport and the city of Mhardeh. “It is not likely for the regime to lose the airport. What is even more dangerous is for the opposition forces to invade Mhardeh. This is why Gen. Sohail Hassan was assigned this task; [his] troops managed on May 22 to advance in the north of the city of Aleppo and lift the siege of its central prison,” he said.

In August, Jabhat al-Nusra had declared the launch of its military operation in Hama’s northern countryside, making Christian-dominated Mhardeh its main objective. At the same time, it was reaching Hama, shelling its neighborhoods and advancing toward its military airport.

The retired officer said the government forces’ control over Murak had a negative impact on the opposition fighters in the rest of Hama’s countryside. He said, “The fighters in the towns of Hama’s northern and western countryside withdrew and moved toward Khan Shaykhoun, after the siege was tightened around Murak, where these towns became surrounded by the Syrian army.”

He stressed that the Syrian army’s control over Murak and Halfaya had secured the road to the camps of Wadi al-Dayf and Hamadiya in the countryside of Idlib to lift their siege. The army advanced toward Khan Shaykhoun, the main stronghold of Jabhat al-Nusra — to which fighters from Murak fled — and took control of it.

From there, it will move toward the countryside of Idlib and to Idlib itself, which is under army control. “Khan Shaykhoun is an important door toward full control over the road from Idlib’s countryside toward Maarat al-Numaan, Kafr Nabl, Saraqib and Ariha, to reach the city of Idlib. If the regime’s strategy works, the central region of Syria — from Idlib, Damascus, Suwayda and the west, toward the coast — would be under its control. This would be of strategic importance for its forces’ operations on other fronts,” he said.
The officer, who retired two years ago, said government forces would face a problem with the large number of opposition fighters in the north. “To reach Khan Shaykhoun, they have to control al-Khazanat camp and al-Salam checkpoint, which is not easy. The Syrian army would then have to face [Jabhat al-] Nusra’s stronghold in Khan Shaykhoun, which would be the biggest obstacle before the Syrian army achieves this operation’s objective,” he said.

It seems that the Syrian army was able to open new fronts that it was not capable of reaching before. If it achieves its objective of reaching Aleppo’s countryside and opening supply lines to the north, the opposition will be in big trouble, between the Islamic State (IS) on the one hand and with the Syrian army on the other. However, the element of surprise is the real decision-maker here, especially after the opposition received new weapons supplies shortly after the international war against IS started.